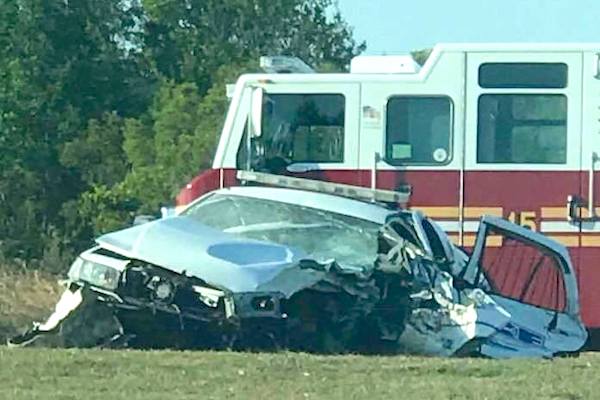 SEBASTIAN – A Sebastian police cruiser crashed on CR-512 Saturday, east of I-95, during a pursuit.

There were no other vehicles in the crash. The police vehicle hit some palm trees in the median.

Details are limited right now and we’re waiting to hear from the Indian River County Sheriff’s Office and the Fellsmere Police Department about the chase.

“We were pursuing a vehicle and one of our cars struck palm trees and was totaled,” Commander John Blackledge told Sebastian Daily.

The pursuit continued west into Fellsmere as the car was being chased by the Fellsmere Police Department and the Indian River County Sheriff’s Office.

A Sheriff’s vehicle was also involved in the pursuit and caught fire.

The name of the Sebastian Police officer has not been released, but they say he’s doing fine.

“He is good, minor injuries and has been released from the hospital,” Police Chief Michelle Morris told Sebastian Daily.

Police are still searching for the suspect in Fellsmere.

Update: The subject (a juvenile) from the car chase was apprehended by a joint effort of the Indian River County Sheriff’s Office including their helicopter in canines Sebastian K-9 officers and the Fellsmere Police Department.