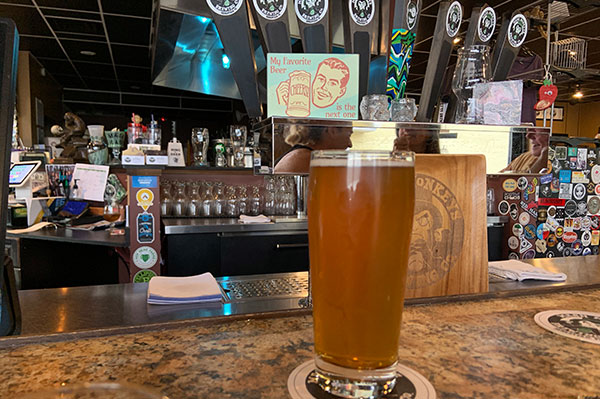 We made another visit to Mash Monkeys Brewing Company in Sebastian to try and pick two of our favorite craft beers on their list. Please keep in mind that these beers rotate.

It was a hard decision to make because we liked them all, but we did narrow our picks down to two for this Sebastian Daily feature.

The first one is called the Rehab Pale Ale. It’s a hoppy brew, with a tropical citrus aroma. The beer has a smooth, refreshing flavor.

Pale ales are my favorite, and this is one of the best. Coincidentally, this beer recipe was made by accident during the brewing process.

“After being partway through the initial brewing process, we discovered we didn’t have the right ingredients. So the recipe was rehabilitated with ingredients we did have and sublimated with others to make it into an easy-drinking hop-forward pale ale,” Mash Monkeys co-owner Derek Gerry told Sebastian Daily.

“A heavy amount of dry hopping with Centennial, Amarillo, Simcoe, and Citra give it tons of tropical citrus aromas followed by a smooth light refreshing flavor,” Gerry added.

Next on the list is a stout called Annie Oatley Oatmeal Stout. I don’t usually drink stouts, but this one was excellent. It’s so smooth with an oat flavor. Annie Oatley is also one of my favorites.

“More oats than necessary go in to give it a silky smooth mouthfeel. All the dark malts are added late in the mash, this gives the color the flavor the aromas while not pulling out any tannins or astringency,” Gerry told Sebastian Daily.

Gerry said the Annie Oatley Oatmeal Stout was by one of their patrons.

“Once in a while, we will have a ‘name the beer’ competition. Customers write their name idea down and put it in a box. Before the beer is put on tap, the employees go through and vote for their favorite name. The winner gets to name the beer and take home a free 32oz crowler of it,” Gerry said.

“One of the best parts of making beer is the naming of them. This way everyone is included in the fun,” Gerry added.

The Rehab Pale Ale and Annie Oatley Oatmeal Stout are rotated into their tap list randomly.

“We have over 80 recipes we rotate through depending on season and popularity. Sometimes we write new recipes and retire others,” Gerry said.

Mash Monkeys Brewing Company does its best to incorporate seasonal local fruits, vegetables, and herbs into their beers.

“With a fluctuating Tap list as frequently as ours changes, we are able to offer many different styles at one time. Lagers, Ales, experimental styles, fruited, sours, light, dark even hard lemonades from times to time make it so there should be something on tap for anyone who comes by,” Gerry added.

The brewery also offers $1 off on beers for the following days:

They also offer 10% off Crowler fills on Tuesdays.

Mash Monkey is also celebrating its two-year anniversary on March 28, 2020, starting at noon. There will be live music performed in the parking lot by the Matt Rosman One Man Band from 1-4 pm, then the Overrated Band from 6:30-9:30 pm.

Smoked on the Water will be catering the food for the anniversary party, and they will also have specialty beer releases for the event.

Mash Monkeys also sells beer soap for $7. While the Annie Oatley brew soap is currently sold out, the next one will be named Acqua Pazza.

Craft beer is popular in Sebastian, and locals are more serious about their brews than ever before. One of the great things about Sebastian is that we have two breweries within walking distance between them to enjoy.