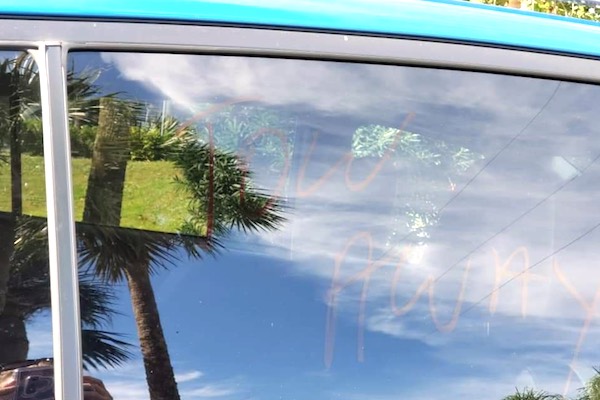 Portside Pub & Grille owner says he did not write "TOW AWAY" on vehicle that was parked near his restaurant in Sebastian, Florida.

SEBASTIAN – A couple of weeks ago, during the Sebastian Clambake Festival, someone accused the owner of Portside Pub & Grille of vandalizing their vehicle while they were parked near his restaurant. To protect their privacy, we didn’t release the name of the accuser.

The accusation included photos of a vehicle with the words “TOW AWAY” written on the windshield and window, while they were parked near the Portside Pub & Grille.

“These idiots wrote with permanent ink on people’s cars for parking in his side lot. What a horrible way to treat another Sebastian citizen. What a big mistake. You will not be getting my business and I would hope that none of my friends would give him business either after this. Shame Shame Shame on him,” the accuser wrote in a restaurant review.

However, the Portside Pub & Grille owner said he never wrote on people’s cars for parking near his restaurant.

“It was very painful for me to have this put on the Internet because if you look at the pictures, this is not in our parking area. I would appreciate it if this was taken off the internet because no one from Portside or myself did this,” Jonathon Preece told Sebastian Daily.

The photos showed up on TripAdvisor and Google Reviews accusing the establishment and the owner of vandalizing their vehicle without any evidence to suggest the restaurant owner wrote anything on the window or windshield of the vehicle.

Sebastian Daily can verify that several people who parked their vehicles on the property at Portside Pub & Grille to attend the Clambake were not vandalized.

On Saturday, Preece said he didn’t mind people parking at his establishment for the Clambake, hoping they would check out his restaurant afterward.

Preece wanted to clear his name and the Portside Pub & Grille of any wrongdoing or vandalizing of vehicles that were parked near the property.