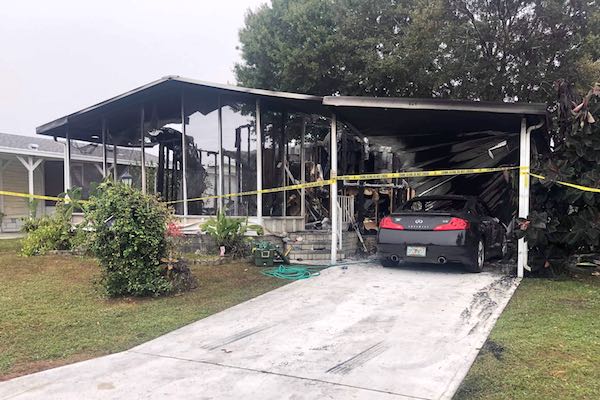 Michael Bradley Raglan, of 824 Tamarind Circle, was charged with Arson in the First Degree, and Discharge Firearm in Public.

“The homeowner set his home on fire and shot some rounds into it,” Goodyear said. The incident occurred approximately 9:00 p.m.

According to neighbors, the man’s behavior was erratic as if “he was on some drug.” There were no injuries reported in the fire.

As of Sunday morning, there’s crime tape around the home while the state fire arson investigator tries to determine the cause of the fire. Brevard County Fire Rescue Chief Mark Schollmeyer said they should have more information by Monday.

One neighbor said they were sitting under their carport a few streets away and heard gunshots before the blaze. A few minutes later, they heard several fire trucks in the area.

Raglan was also arrested in March for shooting at the FPL solar farm in Barefoot Bay. Officials say Raglan was seen shooting up the FPL sign 38 times. He then returned later and was seen shooting the security cameras and a nearby light. Authorities report $10,000 in damages in the FPL incident.