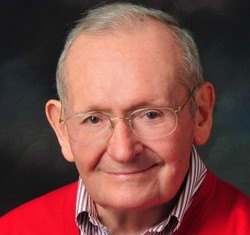 Born in Warren, Ohio, on May 30, 1936, to Howard Edward Ohl and Ella Mae VanAuker Ohl, he was raised in Mineral Ridge and later in Warren, and graduated with honors from Warren G. Harding High School.

Armed with a scholarship, he continued his education at Amherst College where he graduated with honors in 1958 and received the Edward Poole Travelling Fellowship, which he used to study opera in Rome for a year.

While in Italy, he coordinated the Young Artists Concert Series for the American Embassy and he sang in a cafe in Florence. A tenor with an accomplished voice, he turned down the opportunity to sing with the Met as he knew he had stronger academic talents and he returned to the US to begin his graduate education.

Fluent in Italian and with reading and research abilities in Medieval Latin and Greek, he received his Master’s Degree in Medieval History from Columbia University in 1961, his thesis on the Roman fortresses in Southern Italy.

He was chosen by the Rockefeller Brothers Foundation as one of 30 people nationwide to pursue study in theology with an emphasis on values and ethics and he took this opportunity and attended Union Theological Seminary, NYC, where he graduated with honors in 1964. His advisors, Reinhold Niebuhr and Paul Tillich, assured a strong footing in ethics and values, which he then took into his long higher education career.

Ordained by the United Church of Christ (UCC) in Chicago in 1965, he joined Elmhurst College as an Assistant Dean and then began his doctoral residency at University of Pennsylvania. He earned a PhD in Renaissance History with his dissertation focused on the International Character of the University of Padua 1450-1505. His dissertation was recognized for excellence and awarded a prize.

His academic career included appointments as Dean of Students at Colorado College, Assistant to the President and VP at Fairleigh Dickinson University and capped off as President of Salem College/Salem-Teikyo University/Salem International University, 1983-2001.

Always active in the community and civic organizations, he served on the United Way Board and the Boards of the Salvation Army, Rotary Club, Boys and Girls Club, Chamber of Commerce, Girl Scouts, Independent Association and Fund of West Virginia, and BBT, Clarksburg and Martinsburg, W. Va.

He received the Distinguished West Virginian Award in 2000. Proud to be a Son of the American Revolution (SAR), he enjoyed memberships in the Vero Beach Yacht Club and was formerly a member of the Lewes Yacht Club and the University Club, NYC.

He is survived by his wife of 43 years, Joan Eschenbach Ohl; his devoted service dog, Charlie; and his cat companion, Bocelli; and the thousands of young lives he touched thru his higher education and community legacy.

The family requests no flowers. Instead, memorial gifts may be made to the Music Program of the Community Church of Vero Beach.