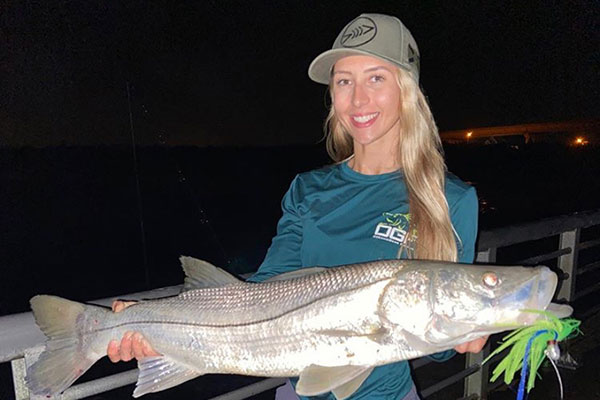 Kelly Young caught a snook at the Sebastian Inlet.

The colder weather hasn’t stopped anyone from fishing at the Sebastian Inlet. We observed people catching snook and redfish off the Jetty pier and in boats.

Kelly Young, seen in the picture above, caught a snook using an Okuma rod & reel. She used Snook Candy Jigs, which another popular way to catch snook.

Joey Aramini caught a 50 inch red drum weighing in at approximately 25 pounds. He used a Penn International Reel and live croaker for bait. Aramini then caught an Atlantic tripletail in the Indian River next to the Sebastian Inlet State Park.

“We used Star Rods Stellar Lite poles, and a 3000 reel. These tripletail are good eating when in season,” Aramini said.

There wasn’t a cloud in the sky when catching these fish, although a little on the chilly side.

“I was just south of the Sebastian Inlet near some docks in my kayak when the tide started going out. The tripletail were floating around everywhere waiting to feed. Also seen the biggest trout of my life around there around 30″ I’d say and a few slot sized snook,” Collins told Sebastian Daily.

Bob Richter, who owns and operates Polar Express Charters out of Sebastian (207-314-8469), had a great day catching this big fish.

“The fish was caught on a Shimano Saragosa from Strike Zone in Melbourne using a live pinfish for bait,” Richter told Sebastian Daily.

A lot of people are using live pinfish as bait. They are a saltwater fish found in subtropical shallow coastal waters of the Atlantic and Gulf coast.

CeeJay Carter And Eric Hawkins caught a Snook and Redfish. Check out these fish as they are large in size.

We’ve been hearing a lot about croaker bait recently. While they can grow to 24 inches long, is an important food fish. Typically, fishermen use the smaller Atlantic croaker, about 5 or 6 inches long, because it’s considered to be the best live bait for catching snook. Croakers are usually caught in cast nets.

Omar caught a 42-inch redfish at the Sebastian Inlet. Look at that fish!

Jim Gast caught a red snapper and a cobia near the Inlet.

“They were caught in 100′ of water out of Sebastian Inlet and caught using vertical Jigs,” told Sebastian Daily.

Sebastian Man Thanks Community for Act of Kindness