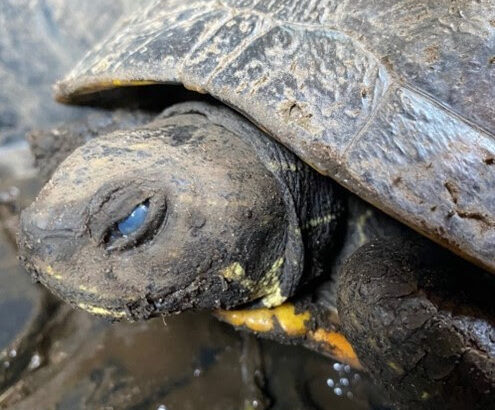 The Florida Fish and Wildlife Conservation Commission (FWC) continues to study a fatal virus infecting freshwater turtles in Florida and is asking the public’s assistance in reporting sightings of sick, strangely acting or dead turtles.

Please report sightings to the FWC through the Turtle Hotline 352-339-8597 or through the FWC reporter app on your mobile device.

The FWC has been studying the turtle fraservirus 1 (TFV1), formerly known as turtle bunyavirus, since early 2018. Since then, the virus has been detected in Indian River County, Brevard County, and other counties around the state.

TFV1 has been detected in softshells, cooters and sliders, and the first TFV1 positive common snapping turtle was discovered earlier this year in southern Indian River County.

A turtle may be sick if it displays any of the following signs:

As part of the ongoing research, the FWC is asking the public for help by taking the following actions:

There is no current evidence to suggest that humans or wildlife other than turtles can be infected with TFV1.

For more information about TFV1, visit MyFWC.com/wildlifehabitats, click on “Wildlife,” then “Freshwater Turtles” and “Turtle Fraservirus 1.”