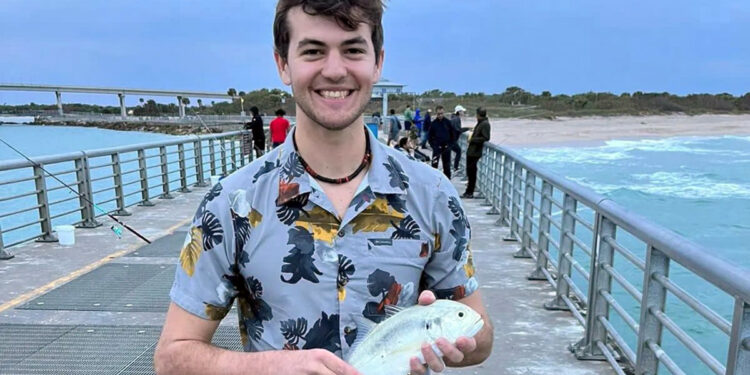 Anglers told Sebastian Daily that the fishing last week was hit or miss. It’s taking longer to catch anything, and there hasn’t been a lot of action with flounder, either.

More of the North Jetty has opened up as the district is trying to finish the rest of the repairs caused by the storms.

A few anglers caught jack crevalle, sheepshead, and some undersized bluefish on the North Jetty.

But on the South Jetty, some people are catching a variety of fish, including small catch & release snook, sheepshead, some black margates, and pompano.

Telleria says that while he’s in town, he fishes at the Sebastian Inlet about a couple of times per month.

Harold Hockman just moved to West Melbourne and went to the Sebastian Inlet for a quick outing. He didn’t catch anything on this day but is looking forward to fishing several times a month.

He used live shrimp on a Okuma Ceymar reel. The reel is reasonably priced for saltwater fishing and does a great job.

It’s made in the United States and used by professionals worldwide. Some of its features include are multi-disc, oiled felt drag system.

Angler Shannon Baugh caught a couple of Sheepshead while fishing at the Sebastian Inlet.

He used an Owner 2/0 circle hook to an egg sinker above the hook. Baugh then used live sand fleas as bait.

Baugh fishes the beaches and the inlet about three or more times per week.

Jack Crevalle are popular near the Sebastian Inlet. They are closely related to pompano and amberjack. Many anglers say they are good fighting fish, an experience nothing you’ve seen before.

As far as eating, anglers say they aren’t the best, but you have to really prepare them to cook. Other anglers say there is no food value from the jack crevalle.

Sheepshead fish live around the Sebastian Inlet and piers and hang out near mangroves and reefs. Many anglers we speak with love eating sheepshead and describe them as being delicious, moist, and mouthwatering.

Some describe the meat as having a sweet shellfish-like taste. You can order the fish in restaurants or buy them at places like the Sebastian Seafood Market or the Indian River Seafood Market.

The pompano is probably one of the best-tasting fish to eat. Some anglers even refer to them as one of the planet’s most edible fish. These fish have no scales, so you cook them with the skin.

They offer a sweet taste; you can bake, grill, broil, or pan-fry. The meat is firm and goes well with butter, salt, and pepper.

If you plan to do some fishing, send us an email with a picture of your catch, the fish you caught, and the reel and bait you used. Please include your full name and the city where you live. We love to receive your fishing pictures too!