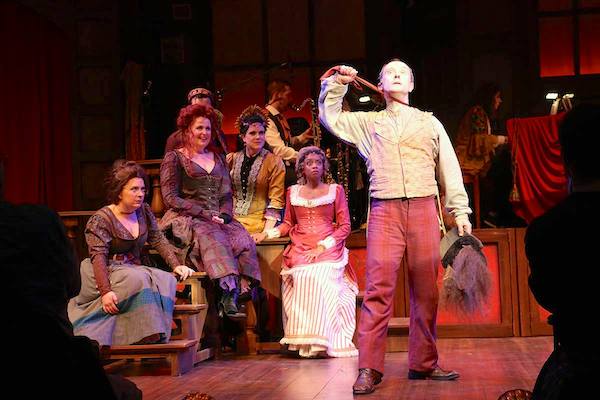 The Mystery of Edwin Drood at Riverside Theatre in Vero Beach.

VERO BEACH – The Mystery of Edwin Drood, Charles Dickens final and unfinished novel, is being performed on the Waxlax Stage at Riverside Theatre in Vero Beach.

This interactive mystery show is the first musical where the audience gets to determine the ending, by choosing who is responsible for murdering the young and charming Edwin Drood, played by Anne Brummel.

They will get to choose between these dastardly villains: Bazzard (Andrew Sellon); The Princess Puffer (Sally Mayes); Durdles (Norman Large); Rosa Bud (Rachael Ferrera); The Chairman (Warren Kelley), among others.

The entire theatre will be set up as an old Victorian English Music Hall & Pub, and attendees can purchase snacks and bar drinks during the performance and from cast member servers.

There are still many show times available, as the performance will run through February 4th.

Single tickets are $75, and students ages 5-17 are $37.50.
Tickets are available for purchase at https://tickets.riversidetheatre.com/shows/.

The Grand Taste of Downtown Vero Beach Gets Underway

The Grand Taste of Downtown Vero Beach Gets Underway