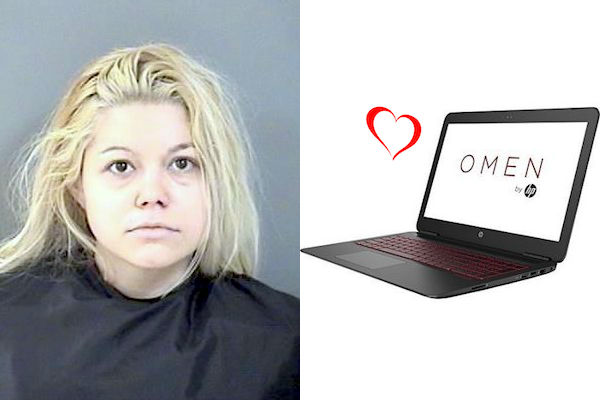 A woman was arrested at the Walmart in Vero Beach after stealing items for her son and husband.

VERO BEACH – A woman who stole from Walmart said she only did it because her husband got her a Coach purse, and that she figured he deserved something nice as well, according to the Indian River County Sheriff’s Office.

People come up with many excuses on why they steal at the Walmart on 20th Street in Vero Beach.

On Monday, at around 5:00 p.m., Walmart security observed 25-year-old Cheyenne Amber West in the electronics department selecting several video game controllers from the locking peg hooks on the shelf, according to the report.

West then meets up with her mother in the store, Alicia West, where the two selected additional merchandise together including an Omen computer, according to video surveillance.

“Walmart loss prevention continued physical surveillance of the suspects as they moved into the clearance department where they removed the labels from clearance items and placed them over the UPC’s of some of the other selected merchandise,” the deputy said.

The two suspects removed the security wrap from the game controllers and the computer and disregarded them on an empty shelf, the report said.

They made their way to self-checkout where they scanned the clearance tags instead of the actual merchandise tags and made no attempt to pay for the computer and other items.

“I am just trying to get gifts for my son that I cannot afford. The computer is for my husband since he just got me a Coach purse, I figured he deserved something nice as well,” Cheyenne West told the deputy.

“Yes, I know what my daughter was doing but I never walked out with anything, and she is just trying to get gifts for her son,” the mother told the deputy.

Cheyenne West was arrested and transported to the Indian River County Jail where she was charged with Felony Grand Theft, and Retail Theft.