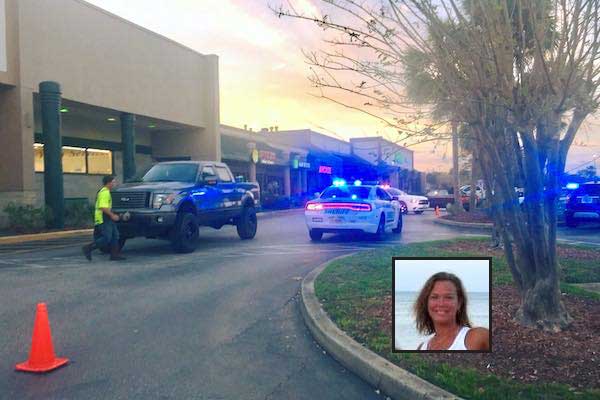 A woman was hit by a truck in the Riverwalk Plaza near Aunt Louise's Pizzeria in Sebastian.

SEBASTIAN – A woman from New Hampshire was struck by a moving truck in the Riverwalk Plaza Monday while picking up a pizza at Aunt Louise’s, according to her husband.

The woman has been identified as 40-year-old Kelly Lavery of Candia, New Hampshire. Jim Lavery said his wife, along with three of their daughters, are visiting relatives in Sebastian.

“She has two fractured hips, fractured ribs, collapsed lung, fractured facial bones, and a severe concussion. Spleen was split in 2 and was removed via emergency surgery last night. They have her sedated and they brought her in for emergency surgery this morning because there was still bleeding from the hip fractures,” Lavery told Sebastian Daily.

Lavery said the driver of the truck is 16-years-old. Law enforcement questioned the driver after the incident. The Florida Highway Patrol is still withholding the driver’s name.

“My youngest daughter, 12, was in our minivan waiting for her mom,” said Lavery. “She heard a scream and the thud and heard people yelling call 911, call 911!”

Lavery said his wife will remain at Holmes Regional in Melbourne for at least a month.

“She’s having surgery probably on Friday to put pins in her hips,” Lavery said. A stabilization bar will be in place to make sure the pins don’t move.

“The kids are not allowed to see her because she doesn’t look like herself anymore,” said Lavery.

Several people saw the accident as they were walking out of Publix.

“The driver was extremely remorseful and at 16-years-old very naive, but a soldier. I watched him immediately jump out of his truck and run to victim. In tears he shook and prayed,” Susan Gallagher said. “He was working (still in uniform) very conscientious and horrified he hit this woman. Please pray for the woman hit and for the driver.”

The accident is still being investigated by the Florida Highway Patrol.