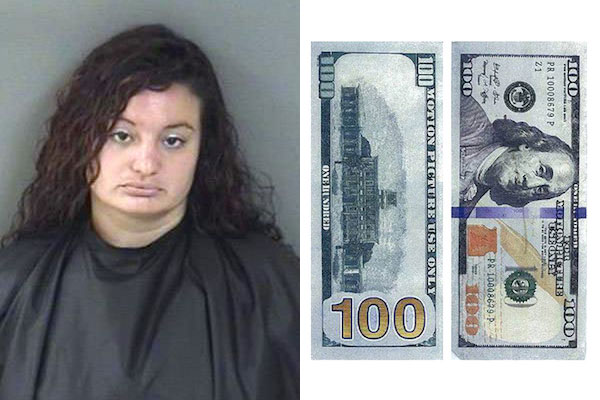 “I was presented with and verified the bill was indeed a novelty as it was marked ‘For Motion Pictures’,” a deputy from the Indian River County Sheriff’s Office said.

The deputy then responded to the address given by the pizza delivery person, which happened to be an empty residence. So, the deputy went to the address behind the house and spoke with a woman.

The woman was identified as 26-year-old Brianna Lynnette Rivera.

“Upon questioning the female about a pizza delivery she started acting nervous and kept asking if she was in trouble,” the deputy said in the report.

Rivera told the deputy that a person in the house ordered a pizza to have it delivered to the vacant house. She said a male subject, who she doesn’t know by name, gave her a $100 bill and told her to pay for the pizza, the report said.

Rivera told the deputy she knew the one hundred dollar bill was fake, but she just moved into the residence and “didn’t want to cause any problems” so she went along with the plan.

The pizza delivery person gave Rivera $45 in change, but she said $10 of it went to her male counterpart.

Rivera was arrested and charged with Theft, and Felony Organized Fraud.

As of Thursday afternoon, Rivera is still being held on a $3,000 bond at the Indian River County Jail.

Sebastian man arrested for a fraudulent prescription at Walgreens