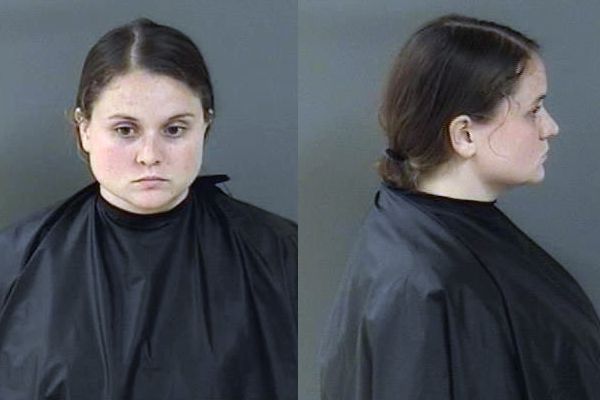 Woman arrested after keeping a dog caged for an extended amount of time without food or water in Vero Beach, Florida.

VERO BEACH – Deputies received a call about a dog being locked inside a small cage for extended hours each day, according to the Indian River County Sheriff’s Office.

Dispatch received the call on Friday at approximately 6:00 p.m. at the 1400 block of 5th Court in Vero Beach. Deputies approached the resident and heard the barking and whining of a dog coming from the enclosed front porch of the home.

Law enforcement officials observed a brown Catahoula standing hunched over in a cage that was too small for its size, according to the report.

A woman who answered the door said the dog belonged to Ashley Taylor Mitchem, 22. When asked where the food and water were for the dog, she pointed to a white bowl laying on the front yard of the residence. She said Mitchem feeds and hydrates the dog with the same bowl.

“She advised that she had not seen Mitchem remove the dog from the cage in approximately three days,” the deputy said.

Mitchem arrived at the residence and said the dog’s name was Sophie and she’s a year and a half old. Mitchem stated that Sophie was underweight because she allegedly suffers from mange, which is a skin disease.

Mitchem says she only keeps Sophie in a cage while she works, which is 10 hours per day, seven days a week.

An Animal Control Officer responded to the scene to retrieve Sophie. Upon arrival, the officer told the deputy that he responded to the residence last month and cited Mitchem for leaving the dog caged for an extended period without food and water.

Mitchem was arrested for Cruelty To Animals and transported to the Indian River County Jail. She was released after posting $500 bond.