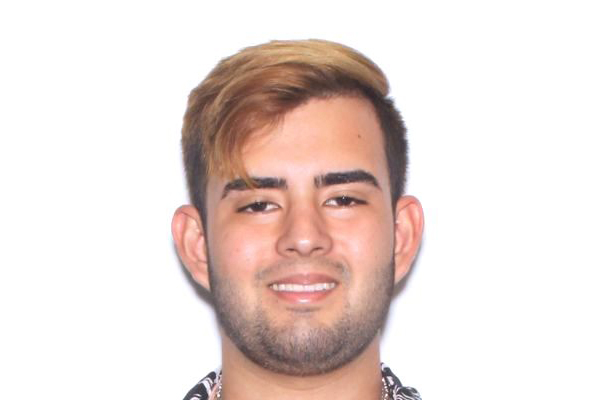 Camillo Villamizar, 20, is a suspect in a Vero Beach shooting.

VERO BEACH – Today at approximately 11:28 a.m., the Indian River County Sheriff’s Office received a call of a shooting in the 800 block of Indian River Boulevard at the Green Way trail.

William McMahon, 28, of Vero Beach, was shot at least once by suspect Camillo Villamizar, 20, also of Vero Beach.

Detectives have since learned that McMahon got into Villamizar’s car parked on the Green Way trail to purchase marijuana. As he was exiting the vehicle, Villamizar fired several rounds at him, striking him in the back.

Villamizar fled the area in a black 2015 Honda Accord bearing Florida Tag Y42UZV.

“Deputies continue to search for the vehicle, noting that the suspect should be considered armed and dangerous,” Major Eric Flowers told Sebastian Daily.

“The victim in this case is currently being treated and is expected to survive. We continue to see violence linked to drugs. We are asking for your help to locate Villamizar and bring him to justice,” Indian River County Sheriff Deryl Loar stated.

Anyone with information on the whereabouts of Villamizar should call 911 immediately as he is considered armed and dangerous.

You can provide information anonymously through Crime Stoppers by calling 1-800-273-TIPS (8477) or their website at www.tcwatch.org . You may be eligible for a reward of up to $3,000.00 for tips leading to an arrest.

Man Arrested After Rollover Crash on CR-512 in Sebastian