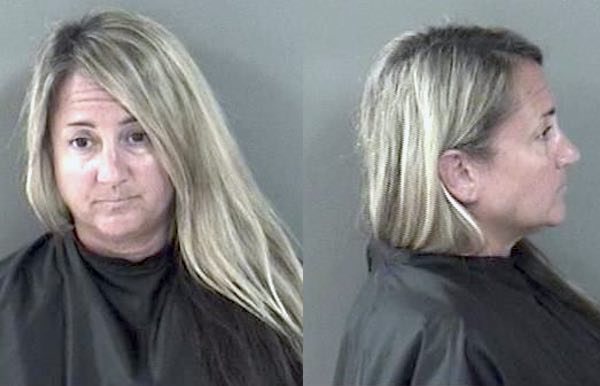 A woman who told police she works as a Paralegal was arrested Tuesday in Vero Beach. (Photo: Indian River County Sheriff's Office)

VERO BEACH – A 48-year-old woman was arrested Tuesday on charges of Felony Aggravated Assault with a Deadly Weapon in Vero Beach.

Leah Marie Hubbard, who told police she works as a Paralegal, was arrested at her Vero Beach home on a warrant from a prior incident.

On July 9th, the Indian River County Sheriff’s Office received a call about a reckless driver in a white Chevy Tahoe near the caller’s residence, according to the report.

Hubbard told a deputy that she got into an argument with her son about him moving out. After the argument, her son left with a friend in a red BMW as she proceeded to chase after them “to get her son to come back home,” the report said.

The son told police that his mother took away his car and asked a friend to drive him so that he could pick up his computer. He said his mother screamed at him as he was leaving the house.

While driving south on 20th Avenue SW, they noticed Hubbard following them. She swerved her vehicle in front of them trying to force them off the road, according to statements provided by witnesses.

As they turned onto 18th Avenue SW, Hubbard again swerved her vehicle in front of them to force them off the road.

The son “stated his mother just went crazy and he was scared that she was going to kill them both,” the Sheriff’s report said.

One day after the incident, the son feared retribution from his mother and decided to record their conversation about the events from the night before.

The deputy heard the recording and stated “Hubbard admits to running the vehicle off the road trying to scare them,” the report said.

When asked what would happen if they crashed, she replied: “It’s not my fault your friend don’t know how to drive.”

Another witness told deputies that Hubbard was trying to force them off the roadway twice and observed her trying to ram (T-Bone) the vehicle.

Hubbard was arrested and transported to the Indian River County Jail without incident.