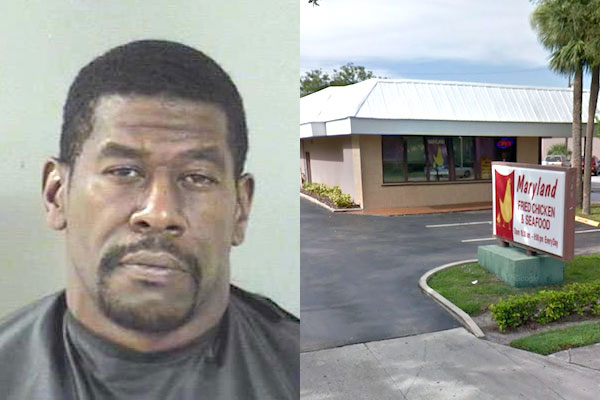 VERO BEACH – Police say a woman was severely beaten Monday in front of Maryland Fried Chicken in Vero Beach by her ex-boyfriend.

The Vero Beach Police Department received a call at approximately 6:50 p.m. at 748 21st Street about a disturbance.

Upon arrival, officers observed blood all over the victim’s face and clothing from multiple lacerations to her face and neck.

The victim said she went to Cunningham’s Pool & Darts to have a drink after work. She then saw her ex-boyfriend, 44-year-old Brandon Sean Douglas, inside the establishment and the two began to argue. The victim then left with the Douglas following her to the car.

Douglas asked the victim to call him a bit**, which she declined. He then started yelling and swinging at her, the report said.

“I was yelling for help and we were wrestling in the parking lot,” the victim told police.

She then ran into Maryland Fried Chicken where they assisted her and called law enforcement. The victim was transported to the Indian River Medical Center.

Douglas then took her vehicle, a red hummer, and drove it recklessly through town, according to the report. A motorist reported the reckless driving, then said Douglas jumped out of the hummer and left it in the middle of the roadway on Royal Palm Blvd.

Vero Beach police then found Douglas and detained him. He was charged with Felony Battery With Prior Conviction, Felony Grand Theft Auto, Felony Robbery Purse/Sudden Snatching, and Grand Theft.