Vero Beach Man Asks Police To Punch Him “I Deserve It” 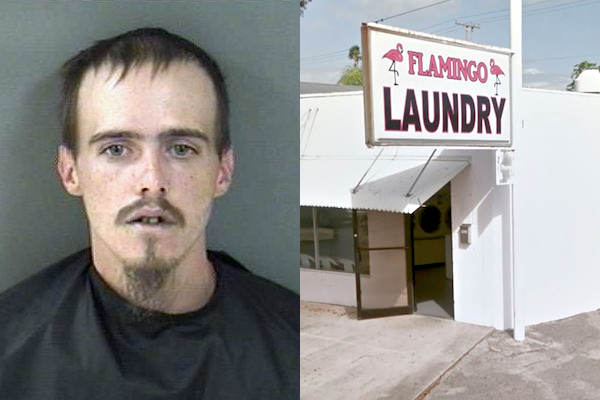 A man was arrested in Vero Beach after stealing a purse from a vehicle parked near Flamingo Laundry.

VERO BEACH – Earlier this morning, the Vero Beach Police Department received a call about a burglary near the Flamingo Laundromat on U.S. Highway 1.

As officers arrived, they saw several people in the parking lot of Flamingo Laundry. One man, who was later identified as 28-year-old Mark Edward Pritchard, of Vero Beach, was yelling profanities at everyone.

A witness told police that he saw Pritchard leaving the parking lot with something hidden under his shirt, and then hiding something in the bushes behind the building, according to the report.

In the bushes, officers found a purse that was stolen from a vehicle valued at about $200.00.

As officers walked over to question Pritchard about the purse, he ran over to the K-9 patrol vehicle and began banging on the back windows and yelling profanities at the dog inside, the report said.

Pritchard then jumped up on the hood of the vehicle, got on his knees, and asked officers to punch him four times because he deserved it.

More witnesses came forward and said Pritchard had approached them as he was holding something behind his back, as if he was carrying a gun.

“If you want your life, go back in the store,” Pritchard allegedly told witnesses.

Video footage from the business showed Pritchard reaching into the passenger door of the victim’s vehicle, and removing a purse while the victim was in the store.

Pritchard was arrested and transported to the Indian River County Sheriff’s Office where he was charged with Felony Burglary, Assault, Disorderly Conduct, and Theft.