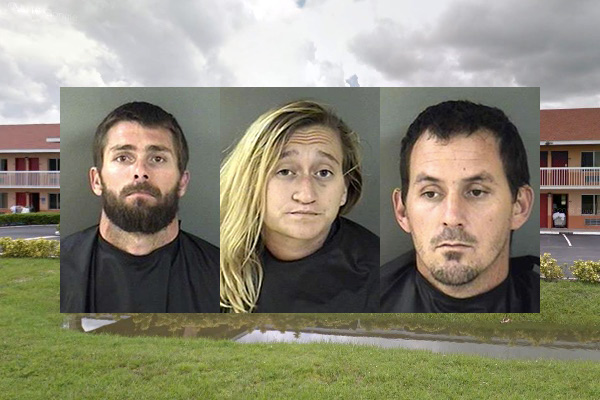 VERO BEACH – The Indian River County Sheriff’s Office received a call on Sunday about a possible hazardous material at the Howard Johnson’s Hotel in Vero Beach.

As deputies arrived, they were advised of a strong odor coming from one of the rooms at the hotel. They noticed that the curtains were quickly shut. The odor was unfamiliar, which reminded one officer of something similar to a cleaning chemical.

The odor became stronger as deputies approached the room in question. They knocked on the door for 2 to 3 minutes and heard a man state that his girlfriend was getting dressed.

The man finally answered the door and the odor became even stronger. The room occupants were identified as 34-year-old George Michael Ercolin, and 23-year-old Kasandra Marie Seymour.

Deputies observed several opened chemical bottles, coffee filters, and Pseudoephedrine pills in the Vero Beach hotel room. The products were recognized as those used in the manufacturing of Methylphenidate. All ingredients along with the smell made deputies believe that it was a Meth lab operation.

One of the deputies found another man hiding under the mattress, identified as 28-year-old Kevin Jay Sartain. The suspect had a syringe in his front right pocket, but he told deputies that he “was a diabetic and that he uses it to inject his medication,” according to the report.

All three suspects were arrested and transported to the Indian River County Jail where they were charged with Possession of Drug Paraphernalia.