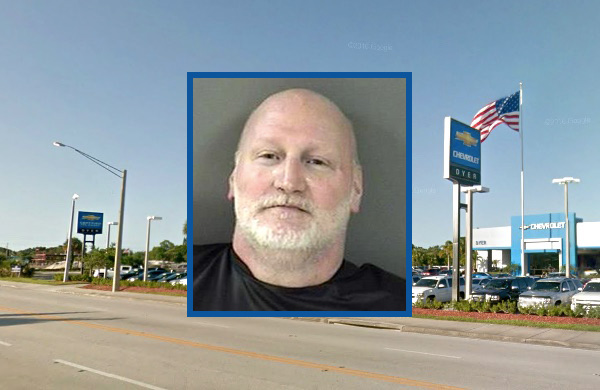 David Beck, 49, was physically restrained on the showroom floor of the dealership when deputies arrived. The suspect was separated from the staff as deputies investigated the physical disturbance.

Beck told deputies that he was “jumped by 6 guys after he tried to purchase a vehicle,” according to the report. The suspect was very unsteady and appeared to be under the influence of alcohol.

During the investigation, Beck began screaming and said he “would hurt all of the workers involved in the disturbance,” the report said.

Deputies then spoke to the staff and were advised Beck became very aggressive with them inside the Vero Beach showroom. One of the victims asked Beck to leave the Dyer Chevrolet dealership, but he refused.

A member of the sales staff said he was calling the police. When Beck observed one of them dialing 911, he walked up and struck the sales person with a closed fist.

Beck was then tackled by several other sales personnel and restrained until law enforcement could arrive.

Another deputy viewed the surveillance video and confirmed that Beck clearly struck one of the sales people after a verbal exchange. The video was consistent with all statements provided by the workers.

Beck was arrested and transported to the Indian River County Jail where he was charged with one count of Battery. Bond set at $1,000.