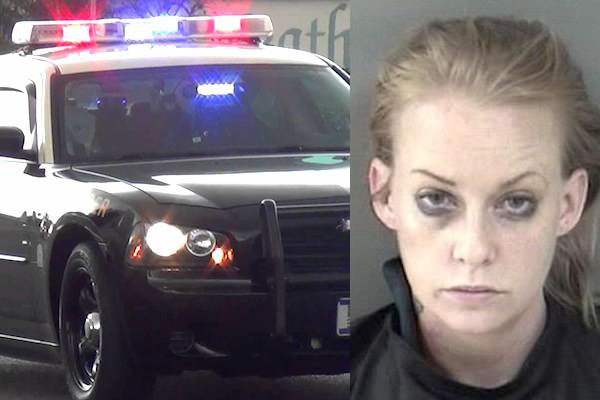 VERO BEACH – A Vero Beach woman who was arrested on charges of DUI and cocaine possession told a Florida State Tropper “eat me” when asked for a breath test.

Kate Santana, 29, was traveling on U.S. Highway 1 near SR 60 when a trooper from the Florida Highway Patrol saw her drive through a red traffic light. The trooper initiated a stop on the vehicle.

The vehicle was registered to Tyler MacFarland, a male passenger in the vehicle. The trooper immediately smelled an odor commonly associated with an alcoholic beverage as he spoke to Santana.

The trooper asked Santana why she didn’t stop at the light, and she said, “I thought it was a flashing light,” the report said. Santana said the vehicle was owned by her boyfriend, MacFarland.

Santana was driving on a suspended license for failure to pay a traffic fine. She was previously arrested on January 18th for cocaine possession.

She told the trooper that she went to “Hurricane’s (Grill and Wings)” to meet her boyfriend who works there, according to the report. After that, they walked to “Stix” near the bowling alley.

The trooper noticed that her words were slurred and asked Santana if she had consumed any alcohol beverages recently, which she replied, “I had one beer.”

She agreed to perform some sobriety exercises and complained afterwards that she was pregnant with twins. Then she told the trooper, “It’s nothing to me. I’m still good. I’m from Puerto Rico, I’m good.”

When asked if she would submit a breath sample, she said, “Yeah, I’ll take the fu—– test.” But then she changed her mind.

When asked if she understood her rights, she replied, “eat me.” When asked if she wished to answer any questions, “she extended her middle finger” towards the trooper, according to the report.

Santana was booked on the following charges:

Santana has no bond set.