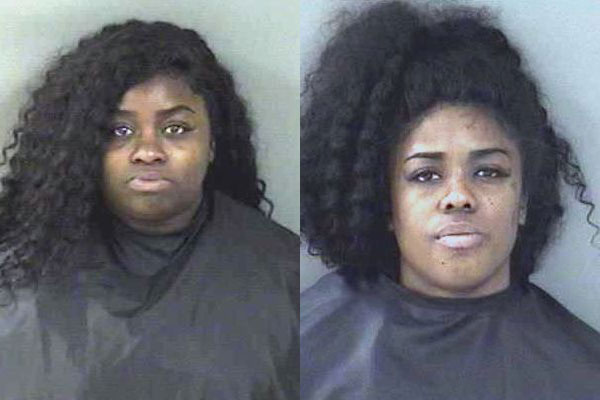 The women, later identified as 32-year-old Latorya Latrice Cooper and 28-year-old Markeva Lushawn Lynn, were arrested on multiple felony retail theft charges. They are both from Miami, Florida.

While in the store, they concealed the cigarettes in a gift bag before leaving. They were seen leaving in a newer Mercedes with dark tinted windows.

A few minutes later, the manager at another Walgreens, located at 5755 20th Street, called police about the same two suspects stealing $861.00 worth of alcohol from its liquor store. The manager said the suspects left in the same Mercedes described in the first theft.

Being that the suspects appeared to be moving north in Vero Beach, a deputy drove to the Walgreens located at 5285 U.S. Highway 1. Once there, the deputy saw the same Mercedes in the parking lot. He entered the store and spoke with the manager.

“Upon looking through the front window of the vehicle, I could see sitting in the backseat in plan view a bag containing several bottles of liquor,” the deputy said.

When entering the store, employees told the deputy that two women had stolen a pack of Newport cigarettes without paying. The deputy could not locate the suspects in the store.

A few minutes later, a Vero Beach Police Officer told the deputy that the subjects had fled from the Chevron gas station across the street in a small car. The vehicle was located near 15th Place, and a traffic stop was conducted.

Cooper and Lynn were in the vehicle and identified as the suspects from the Walgreens security video.

The driver told police that he received a call for an Uber and picked the women up at the Chevron station. He said the two women wanted to go to Checkers before they were stopped by police.

As of Wednesday morning, Cooper and Lynn are still being held at the Indian River County Jail without bond.