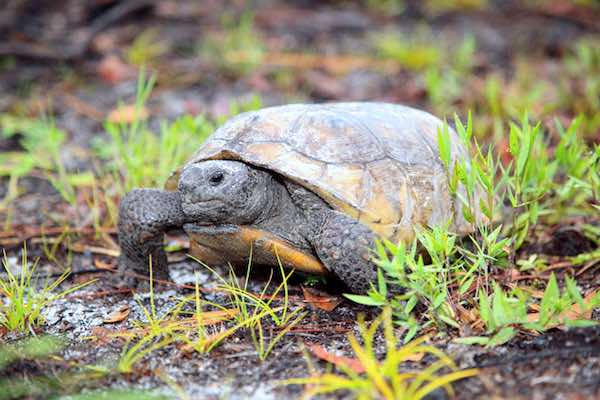 SEBASTIAN – On April 10th, many people in Sebastian, Fellsmere, and Vero Beach plan to celebrate Florida Gopher Tortoise Day and support conservation of this threatened species.

The Florida Fish and Wildlife Conservation Commission (FWC) has encouraged Floridians to get involved in Gopher Tortoise Day since 2016 and share awareness of how people can help this species that is found in every county of the state.

In 2017, Gopher Tortoise Day resolutions were adopted by Charlotte, Collier, DeSoto, Indian River and Sarasota counties, and the cities of Cape Coral, Flagler Beach and Venice.

“If you’re a fan of the gopher tortoise, help us spread the word on conserving this threatened species, whose burrows are home to hundreds of animals, including the eastern indigo snake, gopher frog and Florida mouse,” said Deborah Burr, who heads the FWC’s gopher tortoise management program.

You also can help by using the Florida Gopher Tortoise smartphone app to report gopher tortoise sightings and learn about the species.

If you see gopher tortoises or their half-moon shaped burrow entrances, it is best to leave them alone. It’s illegal to disturb or harm gopher tortoises, their burrows or their eggs. You can help a gopher tortoise cross a road, by picking it up and placing it on the roadside in the direction it was heading. But only do this if it is safe for you to do so, and don’t put the tortoise in your vehicle! Remember too, the tortoise is a land animal, so never attempt to put it into water.