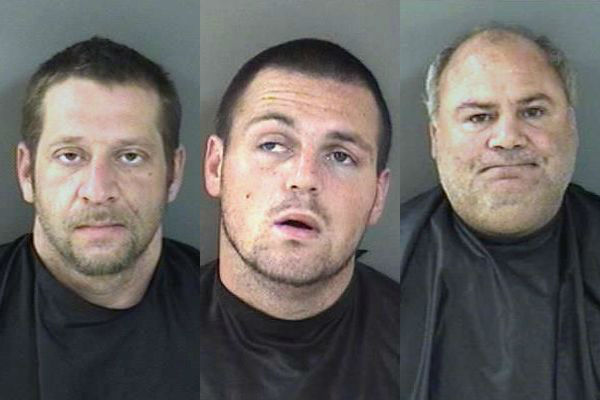 Timothy Michael Kaye, Joseph Salvatore Ancona, and Salvatore Ancona were arrested on charges of battery and assault with a deadly weapon Tuesday at Earl's Hideaway Lounge in Sebastian.

SEBASTIAN – A patron at Earl’s Hideaway Lounge flagged down a Sebastian police officer after he was beaten and threatened with a pellet gun in the parking lot, according to the report.

The incident happened Tuesday at approximately 9:00 p.m. when the victim flagged down the officer on Indian River Drive in front of Earl’s about a disturbance, police said.

Police detained three subjects after two of them fled the area as officers arrived.

The victim advised that he observed three men standing near his truck. He’s had altercations with the same men in the past.

Officers observed small bruising to the top of the victim’s head and a small laceration on his face which had stopped bleeding. The victim refused any medical treatment.

When the victim confronted the subjects, two of the men, identified as 37-year-old Timothy Michael Kaye and 28-year-old Joseph Salvatore Ancona, began punching and pushing him. Then, the two individuals pushed the victim’s head into the rear of his pickup truck.

The third individual, identified as 48-year-old Salvatore Ancona, stated that he was going to shoot the victim and began reaching into a blue fanny pack for the gun.

“The victim advised that he was in fear and afraid that he was going to be shot by Salvatore. The victim was able to get away from the area at which time staff and security from the bar began to show up in the parking lot,” the officer said.

“Upon searching the area to where Salvatore looked, I immediately located a light blue fanny pack lying on top of the bushes. Upon opening the bag, I observed a black Walter handgun wrapped in a cloth. Upon closer inspection of the firearm, I observed it to be a C02 powered BB gun that was unloaded,” the officer stated.

All three men live in Sebastian.

Timothy Michael Kaye was charged with Felony Criminal Mischief, and Misdemeanor Battery. As of Thursday, he’s still in jail on a $5,000.00 bond.

Joseph Salvatore Ancona was charged with Felony Criminal Mischief, and Misdemeanor Battery, and Misdemeanor Resist Arrest Without Violence. As of Thursday, he’s also still in jail on a $7,500.00 bond.

Salvatore Ancona was charged with Felony Agg Assault With Deadly Weapon. He’s also still in jail on a $20,000.00 bond.

Man dies in crash that shut down I-95 between Sebastian, Palm Bay