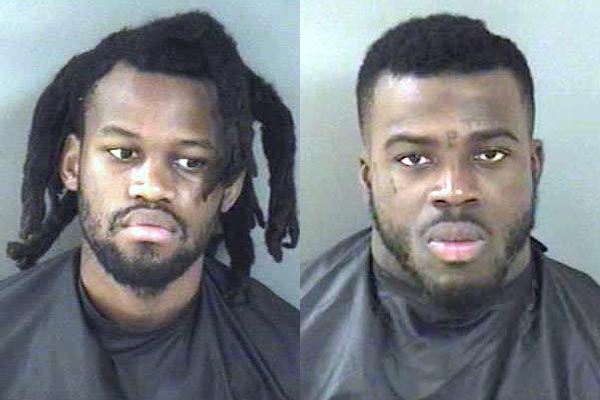 Vero Beach authorities are searching for a third suspect involved in auto burglaries.

A third suspect is still on the run. Deputies seized a stolen SUV from Brevard County along with two handguns, according to law enforcement officials.

The two suspects have been identified as 25-year-old Joshua T. Williams of Vero Beach and 21-year-old Franklin S. Merritt of Titusville. Both men are in the Indian River County Jail without bail.

Williams, a convicted felon, is charged with Felony Carry Concealed Firearm, Possession of Firearm By a Convicted Felon, Felony Resist Arrest With Violence, and Felony Battery on a Law Enforcement Officer. The firearm was reported stolen out of Brevard County.

Merritt was charged with Felony Flee & Elude, driving on a revoked driver’s license, and resisting arrest without violence.

“Merritt had numerous warrants from Brevard and Volusia Counties including charges of armed robbery of a dwelling, grand theft of a motor vehicle, and twelve counts of grand theft of a firearm,” said Indian River County Sheriff’s spokesman Major Eric Flowers.

At approximately 2:48 A.M. the Vero Beach Police Department received a 9-1-1 call from a tipster who witnessed two males with guns running in the area of A1A and Beachland Boulevard.

At 3:10 a.m., officers in Vero Beach contacted the Indian River County Sheriff’s Office about a stolen SUV in connection with the auto burglaries.

Deputies spotted the SUV at Sixth Avenue and 12th Road. All three occupants left the vehicle as law enforcement gave chase. One suspect tossed a handgun.

Two men were detained while another escaped. Police then found another firearm in the backseat of the SUV.

“Our deputies, along with assistance from the Vero Beach Police Department, took two very dangerous criminals into custody today. These men were both armed and have committed a number of crimes along the Treasure and Space Coast. We will continue to work with our partner agencies to add additional charges and identify any other cases that they have been involved in. This case is also an excellent example of our motto ‘If You See Something, Say Something’ in action. The newspaper carrier made these arrests possible. It is a safer day in Indian River County because of our quality law enforcement efforts and the assistance we received from this tipster,” Indian River County Sheriff Deryl Loar stated.