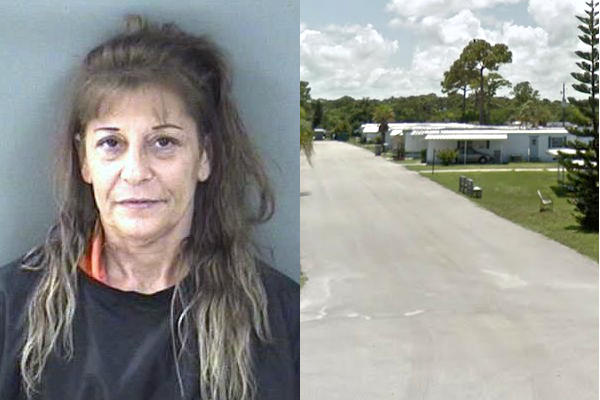 A woman in Sebastian allegedly stabbed her husband during an argument.

SEBASTIAN – A 57-year-old woman was arrested on a charge of Felony Aggravated Battery after she stabbed her husband with a knife, according to the Sebastian Police Department.

Later, Black said Kidd walked into the knife while she was holding it.

The incident happened Tuesday night when police received a call at 9:40 p.m. from a neighbor’s house claiming Kidd ran to his residence claiming his wife stabbed him.

Kidd was bleeding heavily while holding his right chest area with a shirt that was saturated with blood. He pointed to Black and told officers she stabbed him.

Black was in the kitchen using her foot to wipe the blood off the kitchen floor with a towel.

When asked where the knife was, Black pointed to the kitchen sink.

Kidd’s injury was so severe that he was transported to Holmes Trauma Center.

“When I asked Frances what happened tonight she began to tell me about their living arrangements and that she is waiting on assistance from FEMA,” the officer said.

The officer could also smell a very strong odor of an alcoholic beverage emitting from her breath as she spoke.

Black said an argument started when Kidd wanted her to leave the residence. Black then told officers that she was a victim of domestic violence a few days prior, but she did not report it to law enforcement.

She told officers that while they were arguing, Kidd pushed her several times into the bedroom.

Black then said while he was walking towards her, she ran into the kitchen and pointed a knife at him. According to her statement with police, Kidd walked into the knife.

Black was arrested and transported to the Indian River County Jail where he is still being held on a $20,000.00 bond.