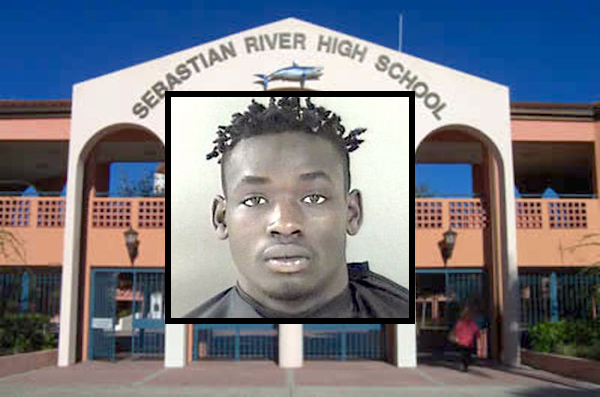 SEBASTIAN – Jama Riggins Jr, an 18-year-old Sebastian River High School football player, appears in court today after he was arrested last month for allegedly having sex with a 14-year-old girl.

Court records show that Circuit Judge Cynthia Cox Riggins will tell Riggins what the charges are, which is lewd or lascivious battery. The judge will ask if he has an attorney.

The charges were filed after the 14-year-old girl told her psychologist that she had intercourse with Riggins in the Sebastian River High School’s team room during a November game.

The girl then told officials that the intercourse was consensual. The incident happened after Riggins was ejected from a game for throwing a punch at an offensive lineman.

Riggins used a friend’s phone to contact the girl to meet him in the team room.

The School District of Indian River County isn’t disclosing whether any action will be brought against Riggins, according to spokesman Flynn Fidgeon.

However, a principal can suspect a student after they are formally charged with a felony.

Friends and fellow students describe Riggins as a “good kid” who was dating a girl four years younger than him. While some agree with the law, they don’t agree that this mistake should ruin his life forever.

Riggins is a promising athlete who initially committed to attend Wake Forest University upon graduating in 2017. He has since decided to reopen his recruitment to receive additional offers.

But all of that can change depending on the outcome of his pending case.

The Kore Band Set To Play At Earl’s Hideaway