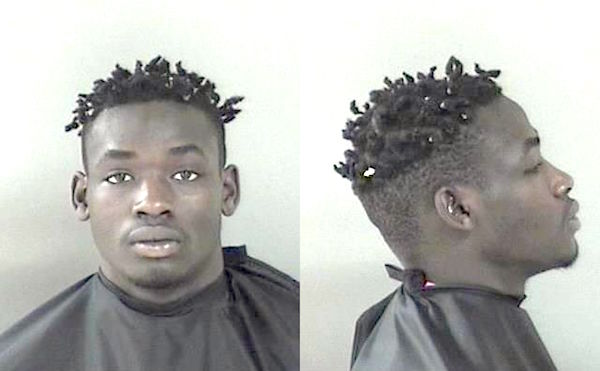 SEBASTIAN – A Sebastian River High School football player was arrested after he allegedly had sex with a 14-year-old girl in the team room during a game.

Jamal Levon Riggins Jr, who has already received scholarship offers from several colleges, was arrested Tuesday morning at the Sebastian River High School on one charge of lewd or lascivious battery.

The alleged incident occurred after Riggins was ejected from a high school football game, according to the Indian River County Sheriff’s report.

The allegation was made by the girl to an adolescent psychologist during a recent counseling session. She told Dr. Raymond Dean that she had sex with Riggins.

The girl’s parents said they put their daughter in counseling as soon as they learned about her having sex with Riggins in the team room during a football game.

The girl told officials that the sex was consensual. She told a state attorney victim’s advocate that Riggins was ejected from a Nov. 18 game and used a friend’s phone to message her to meet him.

The girl met Riggins behind the stadium and then walked into the school to his locker before going into the team room.

She stated Riggins removed her clothes and then had sex with her on the team’s couch.

Investigators used the girl’s phone to message Riggins, pretending to be her. He said not to say anything to the school or law enforcement if they ask her about him.

Riggins is currently being held at the Indian River County Jail in lieu of $7,500.00 bond..