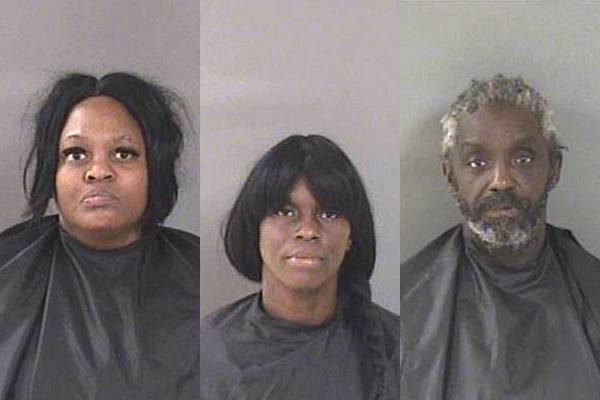 Three members of a theft ring were arrested at Walgreens in Sebastian, Florida.

Three theft ring members were arrested at Walgreens Wednesday after stealing bags full of merchandise, according to the Sebastian Police Department.

Officers responded to Walgreens located at 9595 US 1 in reference to a shoplifting call. Once on scene, the responding officers determined three suspects, later identified as 59-year-old Johnny L. Sanders, 35-year-old Johneisha L. Jackson and 37-year-old Toccara M. Huff all from Tampa, Florida stole approximately $475 worth of merchandise from the store and left.

The three suspects later returned to the store at which time the manager contacted the Sebastian Police Department. The manager observed the subjects walk toward the Publix parking lot (9621 US 1 Sebastian) and updated the responding officers.

Witnesses on scene advised the officers the suspects went into one of the restaurants in the Publix plaza, at which time Jackson and Huff were taken into police custody. A short time later, a Sebastian K9 officer and his K9 partner located Sanders hiding in a tree 150 yards in the woods the north of the Publix Plaza, where he was taken into custody without incident.

Upon searching the vehicle used by the suspects, over 230 items valued at over $2,000 of various over the counter medication, children’s medication, bug spray and energy drinks believed to be stolen from various stores throughout the state were located.

All three suspects were booked into the Indian River County Jail.