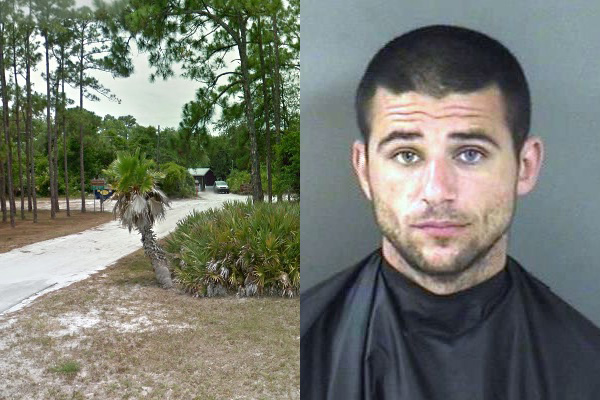 Man stabbed in Sebastian when he refuses to allow motorcycle on his porch.

SEBASTIAN – On Monday, the Indian River County Sheriff’s Office received a call about a stabbing that took place at a Sebastian residence.

Deputies made contact with the victim who said Kevin Mohl, 29, approached him and asked if he could keep his motorcycle on the victim’s porch. An argument then ensued, and Mohl left the residence.

Mohl then returned to the victim’s home and reached in his front pocket. As Mohl got close to the victim, he grabbed his jacket pointed a pocket knife. A scuffle ensued.

Mohl then stated “come on mother fu**** I’m not scared of you,” according to the report. The victim asked, “you gonna pull a knife on me?”

The victim said he was “calling the cops” and Mohl shouted out more obscenities before leaving the scene. The victim received a cut on his right hand during the scuffle. He stated that he was in “fear for his life,” the report said.

Three witnesses confirmed the physical altercation in the victim’s yard. One watched Mohl stick the victim with the knife.

Deputies found Mohl at the entrance to Donald McDonald Park on Roseland Road. He told deputies, “It’s me. The knife is on my right hip. The dude attacked me first,” the report said.

Mohl told deputies that the victim “came after me” and swung at him. Mohl said he pulled his knife to make the victim back away before leaving the residence.

Mohl was arrested and transported to the Indian River County Jail where he was charged with felony aggravated assault with a deadly weapon.