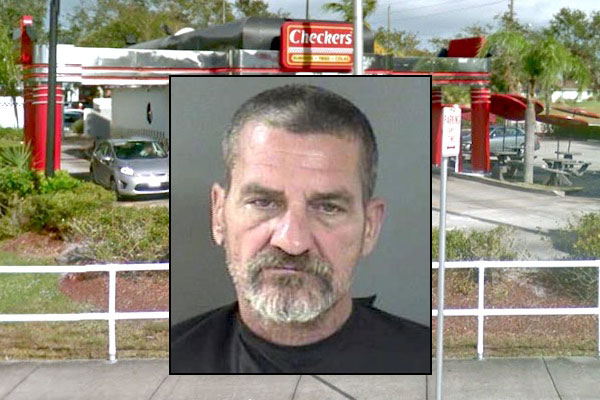 SEBASTIAN – On Tuesday, a man riding a bike in the Checkers drive-thru in Sebastian smashed the window when employees told him to “fu** off” and refused to take his order, according to the Indian River County Sheriff’s Office.

Employees told deputies that a man, identified as 57-year-old Philip Guccione, of Sebastian, rode his bike in the drive-thru demanding food while they were on a break.

One employee told deputies she “was outside taking a break along with the other two employees when a white male pulled up wanting food,” the deputy said. “The male did not like the fact that the employees were on break and were not taking his order,” the deputy added.

According to the affidavit, Guccione began to yell at the employees and was causing a disturbance. The employees then told Guccione they were not going to take his order because he was “acting belligerent,” the report said.

“Philip began to pace back and forth in the drive-through. While [an employee] was busy working, she heard a loud bang and saw the drive-through window smashed. She looked outside and saw Philip get on his bicycle and leave the area,” according to the report.

A short time later, deputies found Guccione at the Riverwalk Plaza across the street from Checkers.

Guccione told deputies that he “smashed the window at Checkers because the workers denied to take his order and told him to fu** off,” according to the affidavit.

Guccione was arrested for Criminal Mischief.

On Wednesday morning, a judge sentenced Guccione to 30 days in jail.