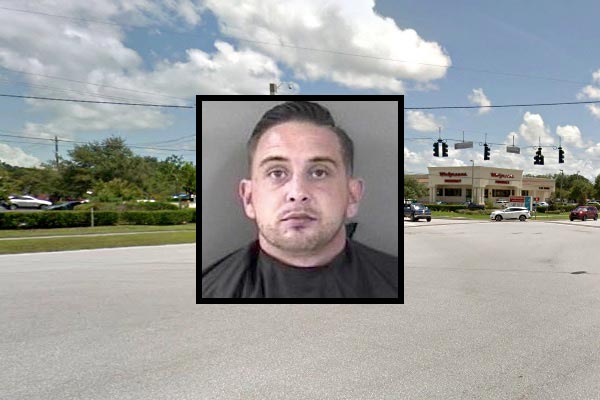 Driver causes accident after texting and driving in Sebastian.

SEBASTIAN – On Sunday, the Sebastian Police Department responded to a vehicle accident at the corner of Roseland Road and CR 512.

Officers observed a vacant Toyota van with the driver side door open and a Chevrolet sports utility vehicle with several subjects standing in the grass near the intersection.

Witnesses say the driver of the Toyota van fled on foot. While searching the van, officers found the driver’s identification and other bank cards in the name of John Szalay, 36.

Officers learned that Szalay had numerous suspensions relating to his driver’s license for failure to appear in 2013.

The occupants of the Chevrolet SUV was taken to the Sebastian River Medical Center for minor treatment of injuries.

A short time later, an officer found Szalay hiding in the men’s room inside the Walgreens store. Police found blood on paper towels in the trash in the bathroom.

Szalay agreed to speak with Sebastian Police. He explained that he took his eyes off the road and looked at his phone after receiving a text message, according to the report.

After reading the text message, he looked back up and “observed that the traffice signal had changed to a steady red light,” the report said.

He told officers that he didn’t have time to brake before the crash. Szalay got scared and fled to Walgreens on foot. He also said he wanted to clean his lip because it was bleeding.

Szalay was arrested and transported to the Indian River County Jail where he was charged with leaving the scene of an accident with property damage, and for driving on a suspended driver’s license.