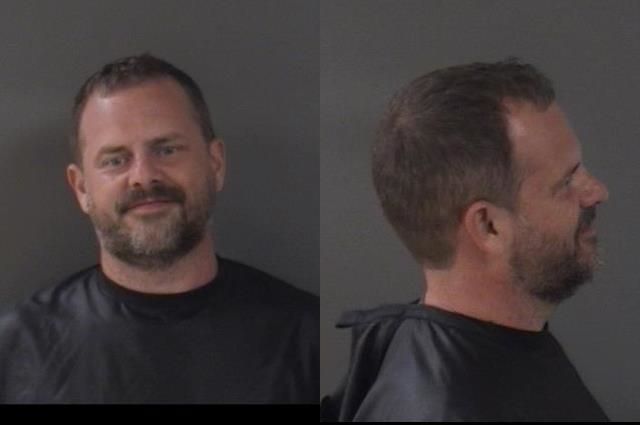 A Sebastian man was arrested Thursday evening after a motorist called the Indian River County Sheriff’s Office to report a vehicle failing to maintain a lane and striking the curb repeatedly on U.S. Highway 1.

A deputy located the vehicle and observed the driver crossing over the fog line several times while traveling more than 70 mph. The car would also make sudden stops, nearly causing a crash amid traffic.

Another deputy said the vehicle was following him too closely before turning into a plaza behind the Italian Cousin restaurant in Sebastian.

“The vehicle attempted to reverse into a parking space, at which time it ran over a curb and struck a palm tree with its rear bumper,” the deputy said.

According to the affidavit, the deputy made contact with the driver, identified as Larry William Blakely, who also had a young child in the front passenger seat. Blakely had no valid driver’s license. He told the deputy that he only had an Oregon driver’s license that expired on May 5, 2021, and could not acquire a Florida license because he did not have all the required documentation.

“Blakeley had slurred speech, red glossy eyes, and a strong odor of an alcoholic beverage emitting from his breath,” the deputy said.

Blakeley told the deputy that he drank two glasses of Coors Light beer and consumed one “pickleback” shot.

According to the deputy, Blakeley consented to some field sobriety exercises, and performed poorly. Additionally, he submitted a lawful breath test and blew .199 and .193, the affidavit shows.

Blakeley was charged with DUI, Child Endangerment, and a citation for operating a motor vehicle without a valid driver’s license. He was transported to the Indian River County Jail, where he is still being held on $10,500 bond.

Sebastian Gas Prices Soar. Have You Ever Seen Prices This High?