Sebastian Man Charged With Aggravated Assault With a Deadly Weapon 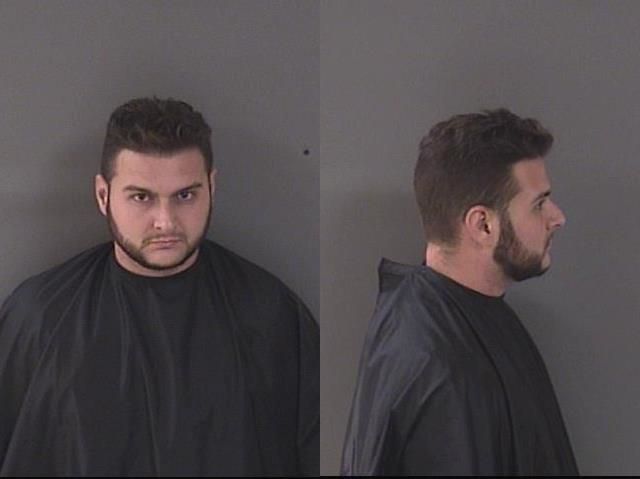 A 23-year-old man was arrested Saturday after allegedly pulling a firearm on another male behind Sandy’s Grille in Sebastian.

Police received a call from 171 Sebastian Blvd, where the victim said a man in a green Toyota pickup pulled a gun on him during an argument, the affidavit said.

According to the victim, the man, later identified as Hunter James Cartolaro of Sebastian, was upset that the victim’s vehicle was blocking access to a body shop located in the commercial area behind the restaurant. The victim said his vehicle broke down and was unable to move it.

“He said the male (Cartolaro) got upset, and they exchanged words that quickly became heated. (The victim) never denied that he was also yelling at the subject and told him to get out of his truck if he wanted to fight. According to (the victim) the male (Cartolaro) backed up, spinning the tires, approximately fifty feet, got out of his truck holding what he described as a small, black semi-automatic pistol,” the officer said.

Cartolaro then drove to his place of work at the Capt. Hirams Resort and hid the pistol, then notified police of his location. Cartolaro told police that he knew law enforcement was looking for him, admitted to having a firearm, and said it was hidden in a storage area.

“Hunter (Cartolaro) had a good attitude and was being cooperative from the time I began speaking with him. He escorted us to the building then upstairs to a dark loft-type storage area. He described the firearm as concealed between two boxes that were stacked approximately six feet high,” the officer said.

Cartolaro said he was at the location where the incident took place because he was there to visit a friend at an auto body shop.

“When he drove around the back of the building, there was a car blocking the small driveway and he asked someone to move it. He said the male with the leg brace (victim) began yelling at him. They got into a verbal argument and he began to back up in his truck. Hunter (Cartolaro) said (the victim) was running at his vehicle and he was afraid he was going to damage it so he pulled his firearm out of the center console and placed it in his lap,” police said.

Cartolaro told police that he never “upholstered or exited his truck with the gun” or threatened the victim with it. He then drove over to the auto body shop before going to his place of employment.

Police said Cartolaro explained that he hid the gun because he was scared and “full of adrenaline.”

“Despite his actions, he said he believed he did not do anything illegal. During the course of the interview, Hunter (Cartolaro) said he has several years of MMA style training and was never scared of (the victim), but pulled his firearm just in case (the victim) had a firearm of his own or tried to damage his truck,” the officer said.

Police said that Cartolaro pulled out a firearm on the victim, who he was never afraid of, and (the victim) believed he was going to get shot, Cartolaro was arrested for Felony Aggravated Assault with a Deadly Weapon.

Cartolaro was transported to the Indian River County Jail, where his bond was set at $10,000.

Tropics Watch: Tropical Storm Watches Could Be Issued in the Caribbean in Latest Update