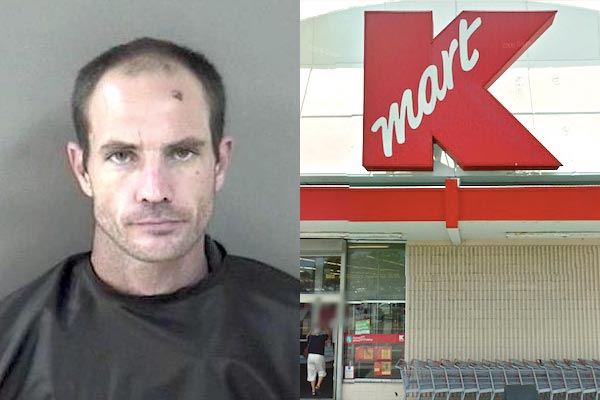 VERO BEACH – A 36-year-old man was seen stuffing children clothes in his pants before leaving the Kmart in Vero Beach.

William James Cummins, of Sebastian, was observed by the asset and protection manager who watched him steal the clothes before walking out and fleeing in a red pickup truck.

Cummins told police he went inside Kmart to return an air pump. He said he was just checking prices to see if it was worth his time before exiting the store.

Cummins then said someone walked up to him and yelled, “Intervention, give me all the sh** back you stole.” He then drove away from the Vero Beach store.

Officers found the children clothes in the truck with the store tags still on them. When asked for a receipt, Cummins handed police one from a different date, and none of the items matched the clothes.

At Kmart, police reviewed security footage showing Cummins entering the store and concealing the clothes in his pants. The suspect was then seen exiting the store.

The asset and protection manager then identified himself and requested Cummins to return the unpaid merchandise to Kmart. Cummins didn’t comply and ran to the truck.

Cummins was arrested for Retail Theft and transported to the Indian River County Jail.