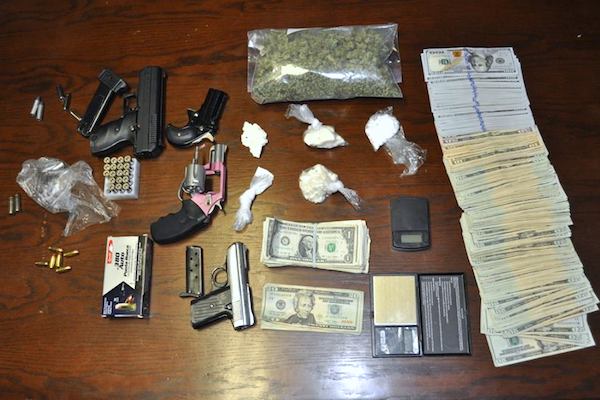 The search warrant stemmed from undercover purchases of illegal narcotics over the several weeks. Arkbar Wilkerson (39) of Gifford, was arrested and charged with possession of a controlled substance. Steroids, prescription medication, and drug paraphernalia were seized from the home.

On Friday, April 14, 2017, Detectives and S.W.A.T. served a search warrant at 4565 33rd Avenue in Gifford. Detectives located $8,829.00 in drug money, four firearms of which one was reported stolen, 2.5 ounces of crack cocaine, more than 120 hydromorphone prescription pills, and 3.5 ounces of marijuana.

On Saturday, April 15, 2017, Detectives and S.W.A.T. served a search warrant at 1346 25th Court SW in Vero Beach. Various drug paraphernalia was located including syringes, spoons with residue, and pipes.

Robert Thompson (66), Cindy Dewell (46), and Vicki Long (58) were all arrested and charged with possession of drug paraphernalia.

“Operation Safe Streets continues to produce arrests and remove guns and drugs from our streets. Saturday’s search warrant had neighbors applauding our efforts in the streets, thankful we removed a drug problem from their block. We will continue to work towards solving the homicide of Deputy Chambliss while also making the streets of Indian River County safe for our law abiding residents,” Indian River County Sheriff Deryl Loar stated.