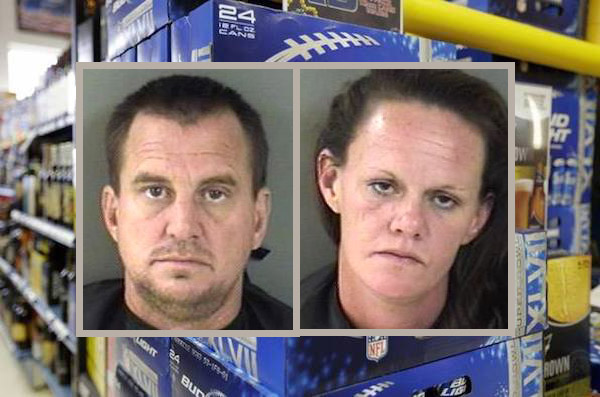 SEBASTIAN – The Sebastian Police Department responded to a call from Publix on CR 512 about a retail theft involving two cases of beer.

A store employee told police that a male and female walked out with two cases of Bud Light beer without paying for them. The employee recognized the female as 32-year-old Suzanne Ward.

According to store video, the couple walked into the beer isle where Ward selected both cases of beer and then placed it on the ground near the customer service area. The male subject, later identified as 42-year-old Gary Hudmon, distracted employees by talking about a Western Union transaction while Ward picked up beer and walked out.

Ward was then seen walking back into the front door of the store after collecting several shopping carts from the parking lot. The employee then confronted Ward about the stolen beer and identified her. Ward turned around and walked away as Hudmon followed.

Police found the couple at a Fellsmere home drinking the stolen beer near a campfire. The case boxes from the beer were partially burned by the fire.

Both admitted they stole the beer from Publix. Hudson had an active warrant for violation of probation.

Hudson and Ward were arrested and transported to the Indian River County Sheriff’s Office where they were booked on charges of shoplifting.

Ward was arrested last month for smacking her mother with a beer can in Vero Beach.