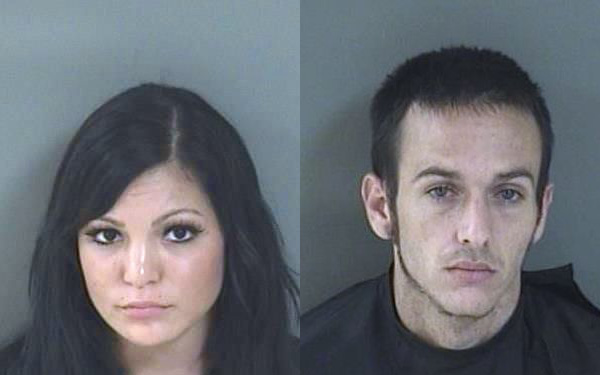 A couple were charged with drug possession in Sebastian, Florida.

SEBASTIAN – Police charged two people with Possession of Methamphetamine Sunday night during a traffic stop. The Sebastian Police Department said the driver was doing 44 mph in a 35 mph zone on U.S. Highway 1.

The driver, identified as 24-year-old Elissa Rose Galati of Sebastian, appeared nervous to police. The passenger, identified 28-year-old Shea Griggs of Micco, had an outstanding warrant out of Brevard County.

Galati is currently on probation for an arrest last year for Cocaine Possession, Heroin Purchase, Methamphetamine Purchase, and Possession of Drug Paraphernalia. Galati is still under supervised release.

The driver consented to a search of the vehicle where police found a used syringe in a purse and a bag with a large crystal substance in it. In addition, a female police officer located a folded dollar bill in Galati’s crotch with a clear crystal-like substance that tested positive for methamphetamine, the report said.

Galati told police that Griggs asked her to hold the meth in her crotch. She was unable to explain why the substance in the dollar bill was separate from all the other items found in the vehicle, according to the affidavit.

Griggs told police that the large crystal substance found in the bag was his, but he knew nothing about the substance in the dollar bill found in Galati’s crotch. He admitted that he was carrying meth in the bag, reports show.

Galati and Griggs were transported to the Indian River County Jail and charged with possession of meth.