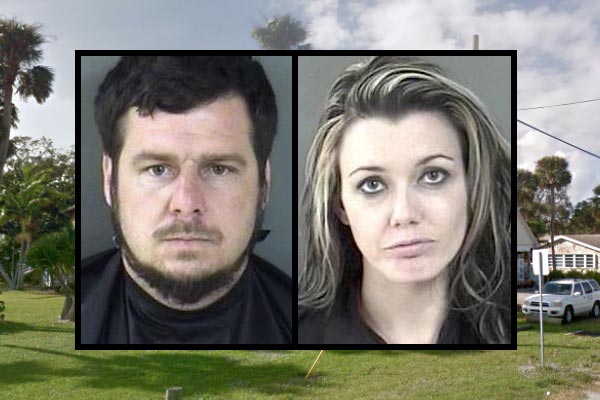 Sebastian Police arrest couple for having a small pot plant.

SEBASTIAN – The Sebastian Police Department found a small pot plant after going to a house where they received a call about a welfare check of a barking dog.

The officer found a dog on a leash that was tangled and unable to move. Police tried to make contact with the homeowner on Indian River Drive, but no one was home.

Then, the officer observed a small marijuana plant in plain view resting on a window sill.

Collins quickly exited the vehicle and began yelling at police for being on his property. He appeared agitated and stated he didn’t want cops on his doorstep.

The officer explained why he was there after receiving a complaint about the dog. Collins grabbed control of the animal and secured the dog inside the residence.

Collins then went into the home and shut the door behind him. The officer walked around to the window where the plant was, but it was gone. The only thing left was potting soil scattered on the window sill.

Collins returned laughing and said, “what plant?” and “what do we do now?” The officer took him into custody.

Benjamin told the officer, “I can’t believe you guys are doing this over one pot plant. It is going to be legal soon,” according to the report.

While in custody, Collins told the officer that he tries to stay out of trouble and occasionally smokes a little herb.

At this point, a Sebastian Police detective completed a search warrant for the residence. They found pieces of marijuana and the pot plant.

Collins and Benjamin were arrested and transported to the Indian River County Jail where they were charged with Cultivation Marijuana, Possession less than 20 grams of Cannabis, Misdemeanor Possession Drug Paraphernalia.