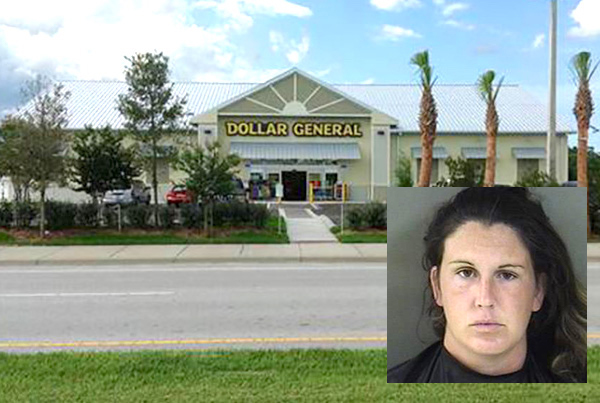 SEBASTIAN – The Sebastian Police Department responded to a physical disturbance between a male and female over alcohol at the Dollar General.

A witness said the female is allegedly the same pregnant woman seen begging for money in front of the Walmart in Sebastian.

John Holgerson told police that he and his wife, who is allegedly seven months pregnant, were in a verbal altercation in front of the store because he refused to give her money to buy alcohol.

According to John, his wife Rebecca Holgerson became so irate and upset that she started smacking her husband “all over his upper torso, upper extremities, and head.”

John walked away hoping to de-escalate the situation, but she threw an unknown beverage at him. He told police that the situation had been an ongoing issue, which takes place quite often.

“So what I smacked my husband. I can smack him,” Rebecca yelled as John was talking to police. “John if you tell them I smacked then we’re done.”

The husband said Rebecca consumes alcohol on a regular basis “and smokes unknown substances even though she is 7 months pregnant.”

As police spoke with Rebecca, to get her side of the story, she appeared to be under the influence of alcohol “due to her slurred speech and odor of alcohol emitting from her person,” the report said.

She admitted that the two got into an argument over money. Rebecca said she was going to buy alcohol and milk. But she continued with “multiple spontaneous outbursts” that only “continued throughout the remainder of the investigation,” according to the report.

Rebecca was arrested on a charge of Misdemeanor Battery Domestic Violence.