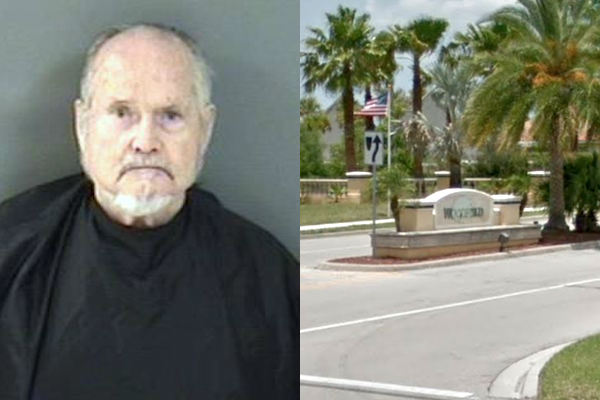 VERO BEACH – A maintenance worker called police after a man threatened him with a gun and said “I’m special forces” at Woodfield Club House in Vero Beach, according to the Indian River County Sheriff’s Office.

The incident occurred Monday at 10:30 a.m. at the 6400 block of Oxford Circle in Vero Beach when a woman approached the worker to move his truck.

The worker refused to move the vehicle because he was working in the Woodfield Club House area. The woman made several rude comments before telling the worker that her husband was on the way and he will be dead by the end of the day, according to the report.

Minutes later, Darrell Hinkkanen, 74, arrived at the Vero Beach location and approached the worker. Hinkkanen told the worker to “move his fu–ing truck,” which the maintenance person declined, the arrest affidavit said.

Hinkkanen then told the worker he was going to “fu–ing kill you” and “I’m Special Forces mother fu–ing,” the report said.

As Hinkkanen yelled “I’m Special Forces” multiple times, he grabbed a firearm in his pocket. At this time, the maintenance person and his crew retrieved to the truck in fear they were going to be shot at.

The Property Manager arrived on scene to diffuse the situation, and spoke with Hinkkanen. He asked where the firearm was, and Hinkkanen pulled the gun out of his pocket, according to the arrest affidavit.

Deputies arrived and made contact with Hinkkanen, who said the maintenance people were assaulting his wife and that’s why he came home. He admitted to being in a verbal argument with the worker but said he never displayed his gun and that there was no way they could see it.

One of the maintenance people recorded the incident on his cell phone and showed deputies. Hinkkanen can be heard stating “I’m going to kill you” and “I’m Special Forces” on the video. The video also showed Hinkkanen making a movement towards his pocket where the gun was, the report said.

Hinkkanen was arrested and booked into the county jail on a charge of Felony Aggravated Assault with a Deadly Weapon. He posted $5,000.00 bail Tuesday morning and was released.