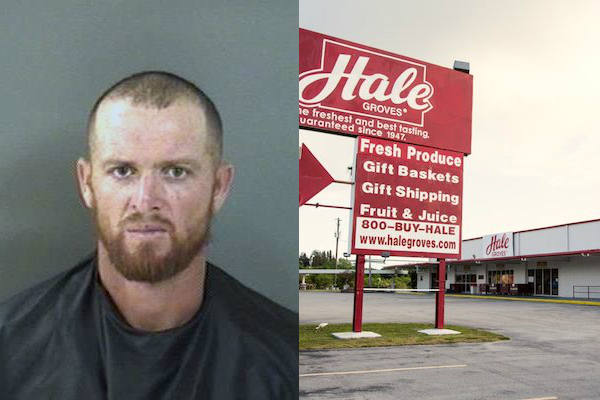 Johni Hernandez, of Vero Beach, stole electrical wiring from the old Hale Groves building because he heard it was about to be torn down.

SEBASTIAN – A Vero Beach man was arrested Thursday after stealing electrical wiring from the former Hale Groves building because he was told it was going to be torn down, according to the Indian River County Sheriff’s Office.

Deputies responded to the former Hale Groves location at 9250 U.S. Highway 1 in reference to a suspicious vehicle at the business.

The building in Sebastian has been unoccupied ever since the company moved to its current Vero Beach location.

In the vehicle was 38-year-old Johni Hernandez, of Vero Beach, who told deputies he was there to retrieve the electrical wiring because a friend of his said the building was about to be torn down.

Also on location was the property owner, Susan Hale, who told law enforcement that she’s trying to lease the building to a new tenant.

Hale told deputies that approximately $1,000 worth of electrical writing had been stolen from her business along with an inside A/C handler. She never gave Hernandez permission to take anything from her business.

Detectives went to Mr. Scraps in Vero Beach and recovered transaction forms and video of Hernandez selling the wiring for approximately $375.00.

Hernandez was charged with Felony Burglary, and Felony Dealing in Stolen Property. He was transported to the Indian River County Jail.