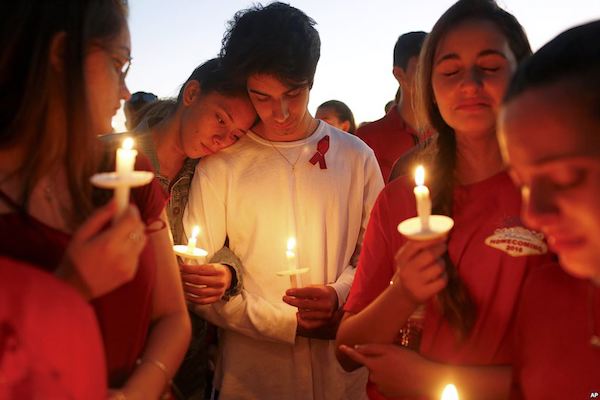 Students gather during a vigil for the victims of the shooting at Marjory Stoneman Douglas High School, in Parkland, Florida.

Currently, resource officers in Florida are paid for from a pool, totaling $64.4 million, of funds called “Safe Schools” that are handed down on an annual basis. This money is then used for school districts to provide safety and security on school grounds.

However, the sharing of this money to 67 school districts has gone unchanged for the past seven years.

The funds are also used for bullying prevention and after-school programs, but 80 percent is spent on school resource officers.

Parents are also concerned with resource officers arming themselves with assault rifles. They don’t want to send their children to something that resembles a war zone.

“Why doesn’t the U.S. repeal the Second Amendment – written, I believe, in a time of war, so understandable? But nowadays, it just seems to create a state of domestic war,” said Frederick Robinson.

The threats facing Florida schools, and the lack of funding to protect them, have been going on for a long time. It’s nothing new.

Before the Valentine’s Day shooting that killed 17 people in Broward County, the Florida Senate and House were split on adding additional funds for the Safe Schools program.

However, lawmakers are changing their tune and showing renewed interest that will add safety and security at schools.

House members are trying to find ways to add $14 more million for Safe Schools, and $40 million to be set aside strictly for mental-health programs in schools.

Some people blame the parents, or the guns, while others blame mental illness for the school shootings. It’s all up for debate.

“This is why I homeschool. I can’t protect my children from everything, but I will try my very hardest,” Margie Billie said.