Man kidnapped and left for dead in Fellsmere 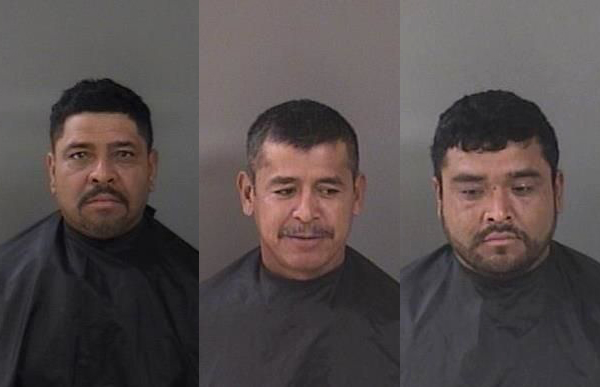 Man says he was kidnapped by four men in Fellsmere, Florida.

A kidnapping victim told deputies that he was beaten and told that his body would be fed to alligators in Fellsmere, according to the Indian River County Sheriff’s Office.

On Friday, April 3, 2020, at approximately 9:15 p.m., a woman called 911 to report that her husband was kidnapped and “left for dead in the middle of farmland in Fellsmere,” according to the affidavit.

The wife said the incident started at around 8:00 p.m. when a man drove up in a white four-door company work truck and asked where her husband was. She told the man he was on his way home from work.

When the victim arrived home, there were four men in the truck, identified as 44-year-old Manual Torres, 33-year-old Daniel Torres, 46-year-old Jorge Bustamante, and Adrian Mojica who is still at large. All four men are from Fellsmere.

The victim has known all four men for about a year. As they were talking in the victim’s driveway, the victim went with the men to “get some beer.” The victim wanted to stay home, but the four men kept “badgering him to go with them.” Eventually, he agreed, and they purchased a 12-pack of beer.

While in the truck, the men told the victim that he wouldn’t be going home to his family because they were going to feed him to alligators. Manual and Jorge Torres were seated on each side of the victim, holding his arms, restricting his movement.

“The subjects drove him to a remote location in Fellsmere where they beat him up,” the deputy said.

At this time, Jorge Torres began to use cocaine and was attempting to force the victim to use the drug as well, but he refused, according to the report.

Manuel Torres accused the victim of spreading rumors about his wife, which the victim denied. The men began punching, kicking, choking, and cutting the victim with a knife.

“[The victim] recalled during the beating and while being thrown into the barbed wire fence, Manuel was on the phone with [his wife] asking if she was sure it was [the victim] who was spreading rumors. [The victim] then recalled Manuel dropping the phone at one point and that the four suspects pushed him against the barbed wire again,” the deputy said.

The victim pleaded for them to stop, but the men said they were going to kill him. At that moment, the victim squeezed underneath the barbed wire fence, ripping his shirt, and ran off while the men were still on the other side of the fence.

The victim was able to break free from the four assailants and ran away, but then became lost in the Orange Groves during his attempt to find safety.

As the victim called his wife, she turned on GPS location for her husband’s cell phone and located him in the area of 141st Avenue and 117th Street in Fellsmere.

Deputies observed multiple injuries all over the victim’s torso and head. The victim’s head had a large amount of swelling and bruising, and his neck had cuts and abrasions consistent with being choked. The victim also had multiple lacerations on both arms and his back.

The victim was transported to the Sebastian River Medical Center, where the medical staff said the lacerations to the victim’s body would cause scarring and permanent disfigurement.

For the past two weeks, detectives investigated the case and interviewed all suspects, including the store clerk who sold them the beer.

On April 14, 2020, a warrant was issued for the arrest of all four suspects. On Sunday, April 20, 2020, three of the suspects were arrested. A fourth suspect is still at large.

All four men are charged with felony kidnapping and felony aggravated battery.

Manual Torres, Daniel Torres, and Jorge Bustamante are currently being held on $100,000 bond each at the Indian River County Jail.

Sebastian Poll Results: Who would you vote for to sit on the council?