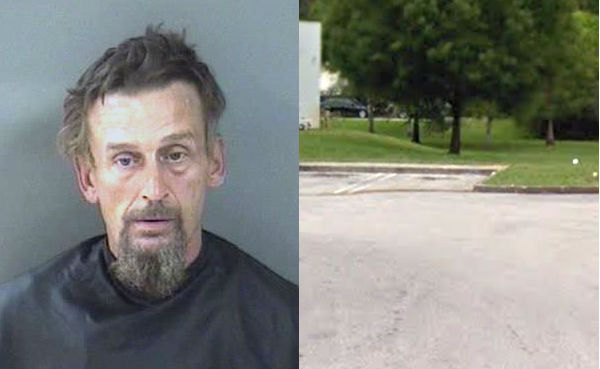 VERO BEACH – A man who was sleeping at the Speedway in Vero Beach wanted to know “who called the law” after he was woken up by deputies, according to the Indian River County Sheriff’s Office.

James Edward Portwood, 42, was found sleeping in the grass next to the Speedway gas station with several beer cans at 800 U.S. Highway 1.

Employees called law enforcement because they felt uneasy and did not want the individual on the property.

“I observed a white male subject lying on the ground surrounded by multiple empty beer cans,” the deputy said. There was also a backpack next to Portwood with unopened beer cans.

When the deputy woke Portwood, he immediately got up on his feet and began to yell “who called the law?” Portwood had slurred speech and his zipper on his shorts were down, according to the report.

“Also near the male subject’s groin area was a dark area which appeared to indicate he had urinated on himself,” the deputy said.

Portwood began to yell “pendejo” and “fu** you” several times. He then tried to escape from deputies by walking fast away from them.

“I’m not going to make this easy on you,” Portwood told deputies. He continued to yell profanities at deputies while he was detained.

Portwood then planked out his body and said: “fu** you, take me!” He had to be picked up by deputies and escorted to the police cruiser.

Portwood was arrested for disorderly intoxication and resisting arrest. He was transported to the Indian River County Jail for processing.

Sebastian Concerts in the Park Series at Riverview Park 2018

Sebastian Concerts in the Park Series at Riverview Park 2018