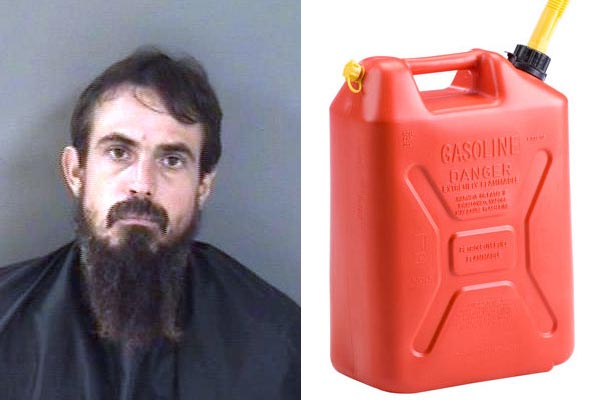 VERO BEACH – A 39-year-old man was arrested on charges of Felony Auto Burglary and Theft after siphoning gas from cars at a church in Vero Beach.

The Indian River County Sheriff’s Office received a call from two people at a church parking near 1075 11th Street SW in Vero Beach about someone stealing gas.

The victims said they saw a man with a long beard siphoning gas from one of their vehicles into a red gas can.

The yelled at the man, and the suspect threw the hose into the woods and left a red gas can by the front doors of the church, according to the report.

One street over, on 12th Avenue, another Sheriff’s deputy found a man matching the description standing by a truck.

Burton Jones, who had an odor of gasoline emitting from his person, told the deputy that his truck ran out of gas. He said he was asking people if he could have some gas or get a few dollars to buy it.

Jones denied siphoning gas from the vehicles at the church.

Deputies found the siphoning hose in the woods and a red gas can by the front doors to the church.

Jones was arrested and transported to the Indian River County Jail.

He still insists that “he did not do anything wrong,” the report said.