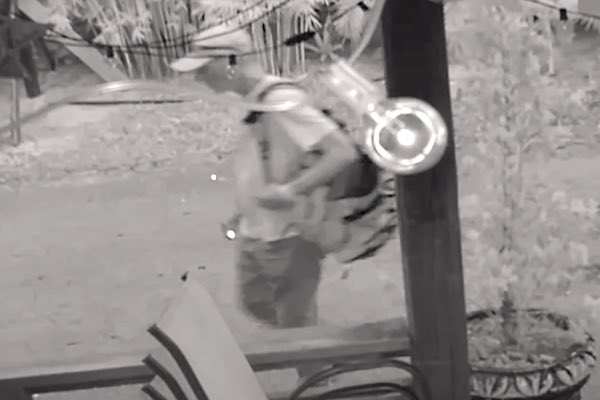 Police seek the public's help to identify a man who burglarized the Kilted Mermaid in Vero Beach. (Contributed photo by the Vero Beach Police Department)

Police say the suspect broke into an outside shed that is refrigerated and stole various meats from the beer and wine establishment.

Several types of meat were taken, approximately 10 pounds of lamb, 10 pounds of shrimp and 15 pounds of pork tenderloin with a total value of $243.

Photos of the bar’s surveillance video system obtained by police captured the suspect wearing a backpack and riding a bike as he left the business with the stolen meats.

If anyone has any information as to the identity of this individual, contact Detective Brian Hesse at the Vero Beach Police Department at 772-978-466 or email Bhesse@VBPD.org.

Local area crime around businesses have been on the decline since the smash and grab burglaries.

About Kilted Mermaid in Vero Beach

The business is known as a neighborhood craft beer and wine bar featuring more than 25 local and global wines by the glass, and 80+ craft and import beers, according to its website. The bar is a “funky, eclectic neighborhood pub with a chill atmosphere,” their website says.

The establishment offers an upbeat theme with a menu that changes regularly to pair wines and craft beers with artisan cheese. Other items from their menu include decadent cheese and chocolate fondues, flatbreads, sandwiches, salads and other small plates.

The bar has a cozy atmosphere where patrons can sit inside or on their patio. They offer Open Mike night on Wednesdays, Trivia on Thursdays, and original music on Fridays and Saturdays. They also offer a Comedy Open Mic night on the third Sunday of each month, as well as live music.

A burglary at Kilted Mermaid is something uncommon, and the owner and police really want to catch this suspect.