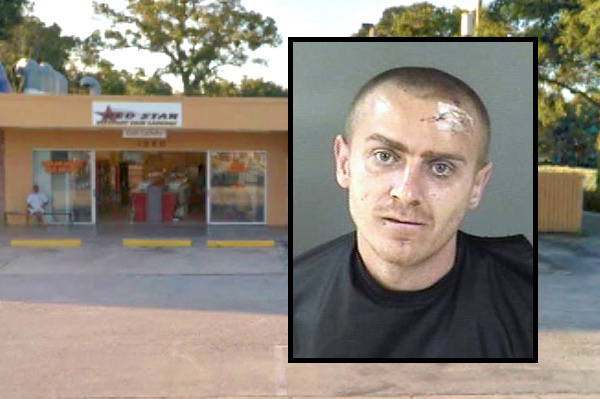 Manager at Red Star Discount Coin Laundry in Vero Beach was attacked by one of his customers.

VERO BEACH – The Vero Beach Police Department received a call from the manager at Red Star Discount Coin Laundry about an altercation with one of his customers.

Arriving officers met with William Wilson, 30, who was bleeding heavily from his forehead. He appeared to be intoxicated and very angry. Wilson was asked to remain seated as EMS was on the way.

Vero Beach Police then made contact with Arthur Jasionkowski who said he was in the office area of the laundromat when he heard a loud noise.

When Jasionkowski came out of the office, he saw Wilson “smashing up” the laundromat. Jasionkowski yelled for Wilson to leave, but he continued to damage the business.

Wilson then told the manager that “he would kick his ass” and struck him with a broom with a metal handle, according to the report. Jasionkowski then grabbed a wooden club and attacked Wilson.

Wilson then broke off a seat from a nearby bench and struck Jasionkowski with it. Two other witnesses at the Vero Beach laundromat then grabbed Wilson and pulled him outside where they called the police.

Officers had to pull Wilson away from charging Jasionkowski during their investigation.

Wilson was transported to the Indian River Medical Center for his injuries. Once released, he became upset and “bashed his head into the cage a few times which caused him to start bleeding again,” the report said.