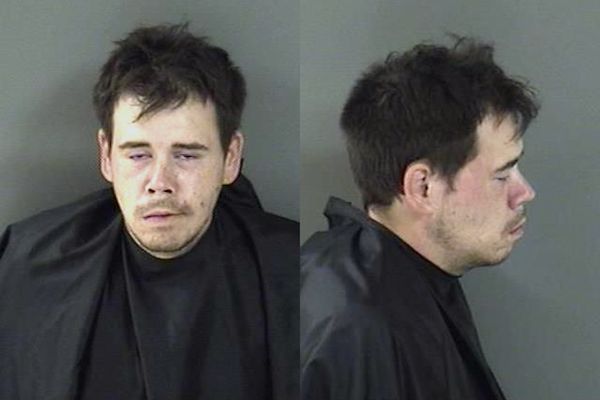 SEBASTIAN – Police responded to Cumberland Farms Tuesday morning in Sebastian about a man behaving erratically at the store.

Patrick William Hutchison, 36, was seen walking around the parking lot and store with blood on his hands, the report said. Officers made contact with Hutchison who was still at the scene.

“Hutchison started displaying very erratic behavior. Hutchison was not answering questions and was not making sense with his statements,” the officer said.

When police asked Hutchison to place his hands on his head, he began to pull away and was placed into handcuffs.

The Cumberland Farms store manager said he saw Hutchison stumble in the store. He then purchased two packs of cigarettes at which time he put on a medical mask and asked: “Does this look like I’m going to commit an armed robbery?”

Hutchison was asked to leave the store, which he did. But a few minutes later he returned and stared at the store manager while still wearing the medical mask. He then walked out a few minutes later and began speaking to a customer at one of the gas pumps. The manager then called Sebastian police because of Hutchison’s disorderly actions.

Officers placed Hutchison under arrest and charged him with Disorderly Conduct and transported him to the Indian River County Jail.

While at the jail, deputies found several pills on Hutchison. He had 40 Gabapentin, 18 Cyclobenzaprine, and 6 Oxycodone. Bond set at $5,500.