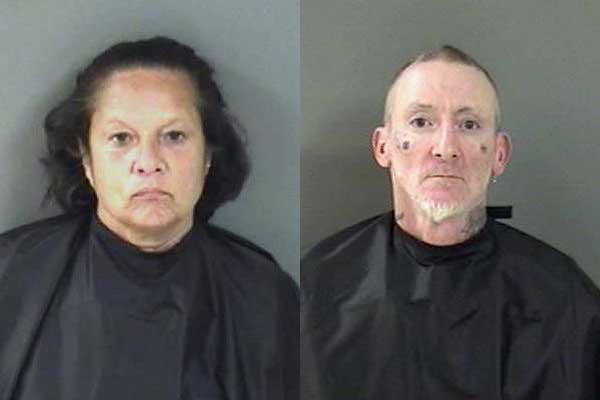 VERO BEACH – A man on a motorized wheelchair called the police to report he was robbed while trying to solicit sex with a woman behind the Applebee’s restaurant in Vero Beach, according to the Indian River County Sheriff’s Office

The victim told deputies he was at Walmart in Vero Beach with a friend and asked him if he knew of any females who would have sex with him.

The friend pointed to a woman, identified as 52-year-old Deborah Ann Bennett of Vero Beach, and the two arranged to meet behind the Applebee’s restaurant.

While trying to arrange sex with Bennet, a man, identified as 44-year-old Christopher D. Fultz, appeared with a knife and demanded all of the victim’s money before fleeing with the woman to Sonny’s BBQ.

The victim stated he had $300.00 in his wallet, and couldn’t run after them because he’s handicapped.

Deputies then found Bennett and Fulz hiding in the woods behind Sonny’s BBQ. Both suspects fit the description and the victim positively identified them.

Fultz denied robbing the victim and said he was never behind Applebee’s. He advised that he and his girlfriend were at Walmart and observed the victim on his motorized wheelchair, but never spoke to him. Fultz said they left Walmart and went straight to the woods behind Sonny’s.

Bennett and Fulz were both arrested on a charge of Felony Robbery Armed With Deadly Weapon. They each have a bond set at $25,000.