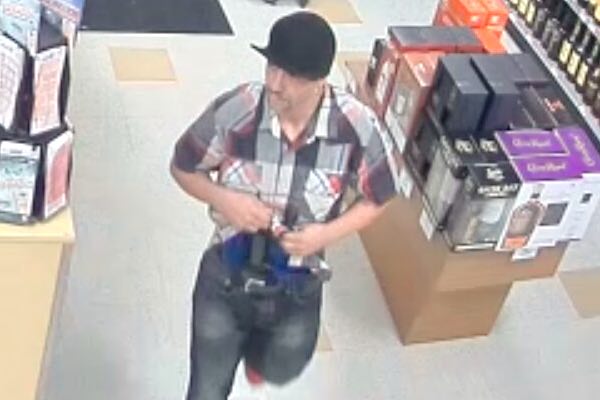 SEBASTIAN – The Sebastian Police Department is attempting to identify a robbery suspect after he stole from the same Publix store twice over the weekend.

On December 23 at about 8:00 p.m., the suspect stole a few bottles of Hennessey before exiting the Publix Liquor store located at 1451 Sebastian Blvd. No contact was made with employees at that time.

On Christmas Eve at about 7:00 p.m. the same subject entered the store again and stole two bottles of Hennessey. But when he was confronted by an employee, the robber threatened them with a weapon before fleeing the area.

“Officers reviewing the store video discovered the prior nights shoplifting and also observed the subject leaving in a red vehicle depicted in the image attached, driving around the rear of the store and seen prowling about the business prior to the incident,” Police Commander John Blackledge told Sebastian Daily.

“We are working on some evidence and video enhancement for the vehicle tag information,” said Detective Todd Finnegan. “We have a couple of leads from witnesses as to this subject’s activity, but we need to identify him. We have surveillance patrols on all of our businesses that are targets of robbery.”

The robbery suspect is described as a white male with a goatee, between 5’2″-5’6″ tall and 140-160lbs. He was wearing a black hat, red and white plaid shirt, blue jeans and red shoes.

Anyone with information on the identity of this subject is asked to contact Detective Todd Finnegan at 772-589-5233 or call Treasure Coast Crime Stoppers at (800) 273-8477. You can receive cash for crime tips and remain completely anonymous.